A total of 889,305 tickets were allocated to people from 188 countries during the random selection draw for the first phase of ticket sales for the 2014 FIFA World Cup™. 71.5% of tickets were sold to Brazilian residents, while 28.5% went to fans from other countries.
Out of all tickets made available for sale, in compliance with the General World Cup Bill (LEI Nº 12.663, Lei Copa), FIFA offered a total of 342,740 tickets in category 4 to fans resident in Brazil, with priority given to students, individuals over the age of 60 and participants of the federal social welfare programme.
As demand from the priority groups was less than the available inventory, 216,618 tickets went to those entitled for discounts in Brazil.
All applicants for the 6.2 million requested tickets will be informed by 10 November 2013 at the latest whether they have been successful or not, either by e-mail or SMS.
Please note that the payment amount for the allocated tickets will be automatically deducted from the credit card provided or, for Brazilian residents, there is also the option to pay with a Boleto payment slip. It is vital that sufficient funds are available on the credit card or that payment is made by Boleto within the deadline, as otherwise the order will be cancelled in line with the Ticket Sales Regulations and the tickets will be made available for general sale.
Outside the host country Brazil (625,276 tickets), the highest number of tickets drawn was for residents of the United States (66,646), followed by England (22,257), Germany (18,019), Australia (15,401), Canada (13,507), France (11,628), Colombia (11,326), Switzerland (8,082), Japan (5,021) and Argentina (4,493). The most popular venue-specific series ticket packages were for Rio de Janeiro (94,500), Brasilia (48,540) and São Paulo (46,916).
The draw was supervised by Caixa Econômica Federal and the Brazilian Ministry of Sports, as well as a public notary, and held in Manchester, England. This is by far the highest number of tickets to be allocated during a first sales window.
For the 2006 FIFA World Cup™, out of the 8 million requests received, 652,521 were successful in obtaining tickets, and in 2010, out of 1.8 million requests, 381,559 tickets were granted. Each applicant was able to apply for a maximum of four tickets per household per match and for a maximum of seven matches only. FIFA Marketing Director in charge of ticketing, Thierry Weil, explained: “The whole draw procedure worked smoothly.
Of course, we would have liked to please even more football fans at this stage, but there will be other ticket sales windows, with the next one starting in less than a week.
By using the electronic random selection draw, we were able to guarantee that the whole procedure remained fair and all applicants had an equal chance. This is very important to us.”
The next sales window will start again exclusively via FIFA.com on 11 November, and would remain open until 28 November.
About 228,959 tickets would be available on a first-come first-served basis. It is expected that the tickets will be sold very quickly. No further tickets will be available in this sales window for the opening match in São Paulo, the final in Maracanã, Brazil’s group-stage matches and the round of 16 in Belo Horizonte as well as the two semi-final matches in Belo Horizonte and São Paulo, which were the most highly oversubscribed games. Please note that during the first two sales windows only one million tickets are made available. 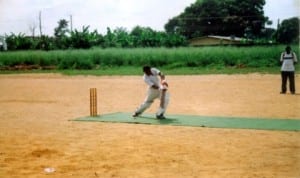 A cricketer in action during a national event in Port Harcourt, recently