The House of Representatives’ Committee on Aviation has rescheduled the public hearing on the alleged purchase of two BMW cars at the cost of N255 million by the Nigeria Civil Aviation Authority from October 29 to October 30, 2013.
A statement issued by the clerk of the committee, Malam Abubakar Chana, in Abuja last Monday said the shift was to allow enough more time for the invited agencies to put their documents together.
“This is to notify all stakeholders and the general public that the two-day Public Hearing of House Committee on Aviation on the purchase of two BMW cars by Nigerian Civil Aviation Authority (NCAA) earlier slated for Tuesday 29™ October, 2013 has been postponed to Wednesday 30th October, 2013.This is to allow ample time for the invited agencies to put there documents together,” the statement declared.
The House had summoned the Minister of Aviation, Ms Stella Oduah, to appear before it on October 29 and clarify her role in the controversial purchase of the two BMW cars allegedly procured for her use.\
Meanwhile, the Nigerian Civil Aviation Authority (NCAA) has disclosed that no single airport has been fully certified in Nigeria as airworthy.
At a public hearing by the Senate Committee on Aviation, last Monday, participants got a shocker when the agency further disclosed that as long as the existing laws on aviation do not put an age limit to aircraft being licensed to fly in Nigeria, NCAA would have no option but to keep registering aircraft irrespective of age.
Speaking at the Senate Aviation Committee public hearing yesterday, Director of Aerodrome Services, Mr. Joyce Nkemakolam, who acted as the NCAA Director-General after the sack of Mr. Harold Demuren, did not mince words in saying that none of Nigeria’s airports possesses full airworthy certification.
In his response, the NCAA Director-General, Captain Fola Akinkuotu, argued that there was currently no law banning the use of old aircraft in the country, saying if an end was sought to the trend, the National Assembly should pass a law to address it.
While condemning the action, Senator Ali Ndume said, “in this time and age where aircraft use high technology, you are approving AOC for an aircraft which is 43 years old. It is an insult to fly Nigerians in an aircraft that is 43 years old. It doesn’t make sense”.
In a related development, three days after some youths staged protest at the Akanu Ibiam International Airport, Enugu in solidarity with the embattled Minister of Aviation, Stella Oduah, fresh indications have emerged that the protest was allegedly sponsored by the Ministry of Aviation.
Contrary to the claims that the protesters were Igbo youths, a source told The Tide that they were students of the Institute of Management and Technology, IMT, Enugu.
According to the source, trouble started when the organizers refused to pay the students the agreed amount.
One of the protesters who spoke under anonymity told our correspondent that they were initially promised N10, 000 each, adding that “after the protest, they took us to the Enugu Press Centre, where we were given only N4,000.
“This was quite against the earlier agreement we reached. They shortchanged us so much and we are not happy about that”.
Further investigations by The Tide showed that a particular non-governmental organisation based in Enugu was earlier allegedly approached by one of the minister’s aide to organise the protest with the sum of N1.5 million but the director declined.
It was gathered that a prominent media worker based in the South-East later accepted to organise the “fake protest.
“He went to the IMT, got some students and had a deal with them. The students didn’t even know why they were at the airport, neither could their supposed leader say the platform under which they were protesting.
“Somebody had to whisper Igbo Youths from behind”, the source added. 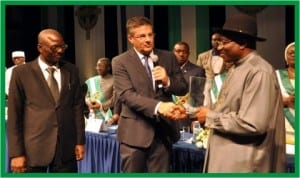