The Fire Alert System
(FAS) — a fire management procedure – is an initiative of the Federal Government aimed at addressing perceptible challenges facing the fight against fire outbreaks across the country.
The system, which was launched by the Minister of Interior, Alhaji Abba Moro, on August 28, 2012, is expected to use the National Data Repository Centre to educate the public on how to prevent and manage fire outbreaks.
During the system’s launch, there was a public presentation of Smokomm, a device designed to detect fire at the earliest stage and automatically alert the nearest fire service station.
Since the inauguration of the system, many experts have stressed the need for states to adopt FAS because of its efficiency in addressing fire-related problems.
They argue the adoption of the system by all state governments will enhance the safety of communities across the country, while generating a lot of job opportunities for the youth.
A publication on FAS lists the potential benefits of the system as reduction in fire outbreaks, minimal government expenditure and employment generation, which would also facilitate the reduction of crime in the society.
Other benefits include generation of revenue for state governments, as well as provision of accurate data for the formulation of policy on fire outbreaks and management.
The publication also states that at fire service stations across the country, the deployment of FAS will reduce firefighters’ response time to fire emergencies, while generating additional revenue.
Besides, it says that if the system is fully adopted, the public would be able to build a fire-prevention culture and experience increased security for their lives and property, while enjoying a facility that can alert firefighters in the event of fire outbreaks.
Commenting on the advantages of FAS, Mr Olusegun Okebiorun, the Controller-General of the Federal Fire Service, said that the adoption of the system would enable the fire service to promptly respond to distress calls on fires.
He noted that whenever there was a fire outbreak, the people usually informed the fire service late, adding that the report often came after the structure had been completely destroyed.
Okebiorun stressed that the situation prompted the fire service to initiate a public-private initiative to improve upon its response time to fire outbreaks across the country.
He, however, commended the past and current ministers of interior for their efforts to kick-start the project.
“This system will also be distributed to all state capitals across the country so that anywhere there is an outbreak of fire, the nearest fire service station will be alerted immediately to elicit adequate response,’’ he added.
In his remark, the minister of interior said that the system would be useful in efforts to protect offices, homes, stores and other structures.
Moro, however, urged the citizens and corporate organisations, particularly the state governments, to key into the project and aid structured efforts to reduce the wanton destruction of lives and property by fire disasters.
Sharing similar sentiments, the FCT Minister, Alhaji Bala Mohammed, stressed that Nigerians, who could avail themselves of the system, should be rest assured that their lives and property would be safe in the event of any fire outbreak.
In view of the benefits of the system, many stakeholders believe that if the fire service of states across the country could hook up to the FAS infrastructure, it would boost the protection of public buildings from fires as well.
They stress that the adoption of the device would also boost the staff-strength of the states’ fire service, while generating additional revenue generation for the governments.
Mr Benson Olatunji, the Chief Executive Officer of 2TOC Solutions Ltd., the inventor of Smokomm, said that the adoption of FAS would mark the beginning of the adoption of a technological approach to solving Nigeria’s firefighting problems.
He noted that Smokomm was an indigenous robot which was capable of controling night fire outbreaks in markets, while enhancing effective fire emergency response time.
“It is a transformation from the analogue data collection, collation and presentation on fire to a digital computation system, where at a glance, data on fire can be made available for research and policy formulation,’’ he said.
Olatunji, who is also the technical partner in the FAS programme, said that since rubber was the major raw material used in producing Smokomm, the invention would create jobs for those working in the agriculture sector.
He also noted that more than 120,000 youths would be engaged for the manufacturing, distribution and installation of the device across the country.
He underscored the wisdom in adopting the fire management procedure, recalling that several fire incidents occurred across the country between 2005 and 2008, for instance.
Olatunji cited the infernos at Jos Terminus Market and Sabon Gari Market in Kano as some of the startling fire incidents during the period.
He said that the Federal Government initiated the fire alert scheme, as part of efforts to curb fire outbreaks in public and private places, while ensuring effective fire management,
Olatunji stressed that the focus of his technical partnership with the Federal Government had been to promote FAS in the grassroots, so as to ensure the safety of the people’s lives and property in the rural areas.
“We have to intensify campaign in the grassroots through adequate collaboration with the state governments.
“This is because research has shown that many lives were lost because of people’s inhalation of generator fumes and in most cases, the entire family could be wiped out. FAS would also be useful in efforts to stem such incidents.
“One of the most important things we should do is to stage serious awareness campaigns, particularly in the rural areas, so as to inform the people about the dangers of fire incidents and how to prevent fires’’ he said.
All said and done, observers believe that the effective implementation of FAS across the country will aid efforts to protect the lives and property of the citizenry from the menace of fire disasters.
Olaitan writes for News Agency of Nigeria 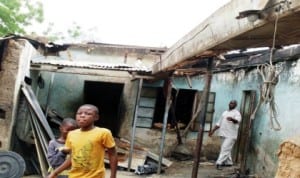 A house gutted by fire in Misau Town, Bauchi State.