Former FIFA ref says Brych should not be suspended for “ghost goal’’
Former World Referee of the Year, Markus Merk, has spoken out against disciplining Felix Brych for awarding a controversial “ghost goal’’ during a recent Bundesliga match between Hoffenheim and Bayer Leverkusen.
“He must be in the schedule. First off, to avoid deepening the personal trauma, and it would also be a bad image for the general public,’’ Merk said in an interview yesterday in  Munich.
“One mistake cannot overshadow years of performance by an athlete.’’
Merk refereed at the 2002 and 2006 World Cups, the 2000 and 2004 European Championships, including the 2004 final, as well as the 1992 Olympics.
In his interview, he argued that the German Football Federation, DFB, should not call back Brych, who was due to referee Tuesday’s Champions League match between AC Milan and Barcelona.
Brych mistakenly gave as a goal, a header by Leverkusen’s Stefan Kiessling that went through a hole in the side netting in Friday’s match in Hoffenheim.
“You cannot just argue away a chain of mistakes. The situation is very unfortunate and unique that I cannot blame him,’’ said Merk, who was named FIFA’s World Referee of the Year in 2004, 2005 and 2007 and was a seven-time German Referee of the Year.
Brych’s linesmen for the match, Mark Borsch and Stefan Lupp, fourth official, Markus Wingenbach, and the grounds management have also been criticised for the incident.
It is the linesmen’s duty to check the netting for holes before the match. 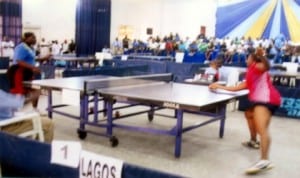 Table Tennis players in action during a national event in Port Harcourt, recently