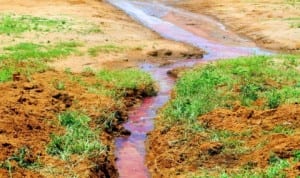 The poor state of the
road leading to the refuse dump site in Gosa village is responsible for the delay in the evacuation of wastes in the FCT, the Abuja Environmental Protection Board (AEPB), said last week.
The Head of Information and Outreach programme of the board, Mr Joe Ukairo, told newsmen in Abuja that the rainy season had further worsened access to the dump site.
“The challenge we have is that the access road to the Gosa Landfill site is not tarred; the waste equipment are heavy duty trucks with heavy waste so they usually sink during the rainy season.
“During the peak of rain, the challenge is how to get there. At times, it starts raining as early as 6 a.m.
“For example, if a truck is supposed to cover section 1 within specific hours and the weather condition interferes, evacuation of refuse would have to stop and be carried over to the next day. This break causes increase in the volume of wastes.”
He, however, expressed delight that FCT Minister Bala Mohammed had approved contract for the construction of a road leading to the dump site, adding that it would soon be completed.
“On a happy note, FCT Minister Bala Mohammed has approved contract for the construction of a road leading to the dump site. It would be completed soon.” Ukairo said that the board had embarked on an enlightenment campaign on the need for residents to get additional waste bags in case of service failure.
“We have done a lot of enlightenment to plead with residents to bear with us and get additional waste bags to put their waste, in case there is service failure, because certainly there will be service failure in weather conditions like this.”
Ukairo also observed that many residents did not have waste bins and therefore, engaged in indiscriminate dumping of refuse on the road.
“The cost for the 240 litre bins is N18,000 while the metal bins which is 1.1 cubic metre, is N150,000.”
The spokesman advised FCT residents to form residents associations as a platform to protect the environment and also demand the right services.
He said that the board had challenges in evacuating wastes from Garki, Utako and Gwarinpa villages, adding that a sanitation committee had been set up to monitor the villages to ensure improved sanitation.