Rumson Baribote and Taiwo Ogunjobi have been handed lengthy bans by the Nigeria Football Federation.
Ousted League boss Rumson Baribote has been handed a 15-year ban from all football-related activities for unethical conduct which includes dragging the NFF to court to demand the dissolution of the interim Nigeria Premier League board.
Former NFF Head of Technical Committee, Ogunjobi, was handed a 10-year ban after he was implicated in a contractual mess which threatened to stall the career of Nigeria youth international Kayode Olarenwaju.
These sanctions were announced in a communique released by the NFF after an Executive Meeting held in Addis Ababa, Ethiopia, shortly before the Super Eagles squared off against the Walya Antelopes of Ethiopia.
The decision to hand the lengthy bans to both men was based on the recommendations of a Chris Green-led investigative committee set up to look into offences in which they were implicated.
It was also announced through the communique that Adeleye Adepoju, the head of the NFF’s Organizing and Disciplinary Committee, has been suspended as a result of bribery allegations levelled against him.
The sanctions are expected to be ratified by the General Assembly of the Nigeria Football Federation, which is scheduled to take place on 28th of November in Warri Delta State. 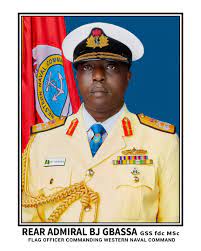 Flag Officer Commanding Western Naval Command, Rear Admiral Jason Gbassa, has observed that sports can be a very strong tool for national unity.
Speaking as Special Guest at the 2nd Olo Boat Race competition at the Navy Town Lagos, Saturday, the navy chief said he was pleased to see the kids compete “because they are the future of Nigeria.
“It starts from here. The joy of it is that I have seen children from different backgrounds competing as one. There is no discrimination between one from the north and another from the South or east.”
It was fun and fanfare, yet the rivalry among the contestants was high.
The spectators, among who were Rear Admiral Jason Gbassa and other top naval officers and invited guests were treated to the best of sailing and boating throughout as the contestants glided on open water in exhilarating fashion.
Events competed for included swimming, boat racing, Kayak and GP 14.
In the GP 14 Sailing race, the pair of Alaba Matthew and Elizabeth Crown finished first, ahead of Moses Orubani/Khadija Giginya and the pair of Izilein Emmanuel/Japhet Benedicta. In the Laser event Ekiye Abraham Leo dusted Abdulsalam Jamiu and Gbamire Isaac.
Giginya Asmau won the Girls swimming event. She beat Nafisat Mohammed and Shawulu Serah, while Giginya Aminu defeated Hassan Saleh and Nwankwo Raymond to win the Boys Swimming event. In the Men’s category, Solomon Kehinde won the event ahead of Ekiye Abraham and Isaac Gbamire who finished second and third respectively.
The high point of the day’s events was the Kayak contest in both men’s and women’s categories.
Alaba Matthew took first in Kayak Men’s category. He defeated Izilein Emmanuel and Orugbami Moses while Izilein Deborah defeated Giginya Asmau and Giginya Khadija to win the Kayak event in the women’s category. Hassan Saleh defeated Giginya Aminu and Nwankwo Raymond in the Kayak Boy’s event.
The kids were not left out as they also competed in the open water swimming event. Japhet Jeffery finished in first place and was followed by Nwankwo Jacinta and Umoh Christopher. 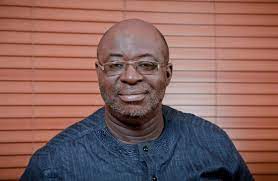 First Vice-President of the Nigeria Football Federation (NFF), Seyi Akinwunmi, has warned that ill-attitude from fans in match venue won’t be tolerated any longer.
Akinwumi stated this on Friday while addressing participants at the Nigeria National League (NNL) Football Development Summit for Club Administrators and Media in Abuja.
Recall that last weekend, the game between Kano Pillars and Akwa United, where angry fans bounced on the match commissioner before the game was abandoned.
However, Akinwunmi in a chat with Tidesports source noted that hooliganism at match venues had affected the progress of the country’s football leagues.
“We need to stop this attitude of win at all cost. We will also stop this hooliganism or whatever it is. It has gone on for far too long and I can assure you that if people are not careful, they will see themselves prosecuted in a short while.
“NFF is doing as much as it can, within the ambit of the law. We are speaking with security agencies to support us in terms of enforcement and prosecution. I can’t give a timeline for the eradication of this vice but we are working on it,’’ he said.
“Sometimes, hooliganism is a product of ignorance. Some people feel that they are fighting for their rights and the best way to do so is to become violent. That is why we must educate the public and develop, thanks to this summit. Nigerian football must be abreast of the recent developments in football around the world.
“We need the help of everyone to educate the public and expose people who are serial instigators of this crime. So, we need the support of everyone, including the media,’’ Akinwunmi added.