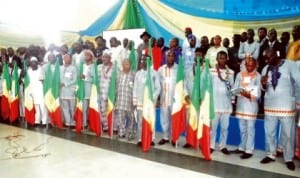 The Independent National Electoral Commission (INEC) has declared Mr Emmanuel Aguariavwodo of the Peoples Democratic Party (PDP), winner of the October 12, Delta Central Senatorial District bye-election.
The Returning Officer, Prof. John Arubayi, announced yesterday in Ughelli, Delta State, that Aguariavwodo polled 263,024 votes to defeat eight other candidates.
Arubayi said Mr Otega Emerhor of the All Progressives Congress (APC) scored 29,075 votes to emerge second, while Mr Ede Dafinone of the Democratic Peoples’ Party (DPP) followed with 29,055 votes.
According to the declared result, PDP won in all the eight local government areas in the senatorial district, though the opposition parties claimed there were malpractices.
But the INEC official described the conduct of the by-election as free and transparent and urged all the political parties that took part in the exercise to accept the result in good faith.
He commended the political parties and their agents for the peaceful conduct of the election.
Voting started late in many of the voting centres, following the late arrival of electoral and voting materials at the polling units and the voting period was extended for hours as a result.
Earlier, the Resident Electoral Commissioner in Delta State, Mrs Gesila Khan, had described the election as peaceful in spite of some initial challenges.
She said “normally, voting ought to have started at 12.30 p.m., but because of the initial hiccups, it was not so. However, it ended peacefully at the end of the day.’’
The resident electoral commissioner said the initial challenges encountered were a normal occurrence.
“There can never be 100 per cent perfection in any election conduct anywhere in the world,’’ she added.
The Commissioner of Police in Delta State, Mr Ikechukwu Aduba, said the bye-election was peaceful because his men were at all the voting centres to maintain law and order.
Aduba had earlier warned against violence during the poll, threatening to deal with any person found disrupting the election.
He had also warned policemen in the state to steer clear politicians and government officials during the exercise, saying that any violation of the order would be severely punished.
The bye-election followed the death of Sen. Pius Eweridoh of DPP on June 30, 2013.
Meanwhile, the Democratic Peoples’ Party (DPP) has reacted to the October 12 Delta Central Senatorial District bye-election won by the PDP, alleging that it was rigged.
In a statement issued by the DPP Chairman in Delta State, Chief Tony Ezeagwu, the party alleged that the election was a sham and disassociated itself from the election.
It also alleged that “the scale of impunity and violence by PDP thugs, cultists and security agents is just unimaginable.
“There was no election and we know the conflagration that could follow if we do not stop our people early enough from going to collation centres to witness the results collation.’’
The party, however, urged its members and supporters to remain peaceful.
In his reaction, the PDP Publicity Secretary in Delta State, Mr Macaulay Deighan, said the party’s victory was well-deserved and the alleged rigging was false.
Deighan said that the electorate voted for the party’s candidate, Emmanuel Aguariavwodo, because they believed in him, adding that the party worked hard to secure the victory.
He described the election as peaceful, saying security agencies were on ground to maintain peace and order.
He added that “it is not a surprise that we won the election because we campaigned seriously to regain the seat.
“The allegation about rigging is baseless because it was a one-man-one-vote affair, which everybody witnessed. PDP is the majority party in the state.’’
On his part, the All Progressives Grand Alliance (APGA) Chairman in the Delta State, Mr Ogueshi Eboka, said PDP won the election and the exercise was peaceful.
“We participated and we tried our best but could not win. Definitely, I knew that PDP would win,” he said.
However, the All Progressives Congress (APC) alleged that the bye-election was marred by electoral malpractice “and widespread violence perpetrated by security agents and thugs.’’
The party made the allegation in a statement issued in Lagos on Sunday by its Interim National Publicity Secretary, Alhaji Lai Mohammed.
The APC alleged that there was no voting at all in most of the eight local government areas and the 85 wards in the district.
It also alleged that “the PDP used armed security agents to chase away voters in opposition strongholds.’’