The Alhaji Abubakar Kawu Baraje-led faction of the Peoples Democratic Party (PDP) has noted the ruling by a Lagos High Court presided over by Justice Oludotun Adefope-Okojie, who threw out the suit we instituted against the illegal party regime of Alhaji Bamanga Tukur and his National Working Committee (NWC).
We wish to assure our teeming members and Nigerians in general that there is no cause to worry. This is because the ruling has nothing to do with the merit of the case but the place of filing. As advised by His Lordship, we shall hasten to re-file the suit, this time in Abuja, as we are convinced about the merit of our case. Our determination to sack the usurper, Alhaji Tukur, and rescue our great party from his misrule has never been stronger.
Finally, we urge all our supporters and members not to despair or exercise any atom of fear and should continue to support the leadership of our great party under the able leadership of Alh Abubakar kawu Baraje as we are getting closer to freeing our party from the enclave of undemocratic elements currently holding us to ransom and doing everything within their powers to ruin all that our founding fathers struggled to build.
With yesterday’s court ruling, we are now very determined to restore PDP to the path of honour particularly now that we have lost our great first National Chairman, Dr Solomon Lar to the cold hands of death. Let us reiterate that nothing and we repeat nothing will stop us from implementing the visions of both Dr Solomon Lar and all the founding fathers of our great party to the letter and keeping all undemocratic elements at bar from leadership of our great party.
Meanwhile, an Ikeja High Court yesterday dismissed Alhaji Abubakar Kawu Baraje-led faction of the Peoples Democratic Party (PDP) suit against Alhaji Bamanga Tukur, for want of jurisdiction.
The Judge, Justice Oludotun Adefope-Okojie, held that the Lagos State High Court had no power to assume jurisdiction over a matter which originated outside its territory.
Adefope-Okojie said the applicants had averred in their affidavit that the cause of action was the Special Convention of the PDP held on August 30 in Abuja.
She said they also averred that the PDP had its registered office in Abuja and that none of the defendants was resident in Lagos State.
The judge held that the argument by the applicants’ counsel that the court could effect its judgment against the defendants was not relevant at this stage.
“I hold that with the defendants not resident in Lagos and the subject matter originating in Abuja, the High Court of Lagos State has no power to assume jurisdiction over this suit.
“I accordingly make an order striking out the suit,’’ Adefope-Okojie said.
It would be recalled that Baraje, Dr Sam Sam Jaja and Prince Olagunsoye Oyinlola, filed the suit on September1.
They urged the court to restrain Tukur, Uche Secondus, Deputy National Chairman, Kema Chikwe, Women Leader, and Olisa Metuh, National Publicity Secretary; from parading themselves as PDP National Executive Committee members.
The counsel to the defendants, Mr Joe Kyari-Gadzama (SAN) and Mr Emeka Etiaba, had on September 18, asked the court to strike out the suit for want of jurisdiction.
They argued that the writs of summons was not endorsed and did not comply with the mandatory requirements of Section 97 of the Sheriff and Civil Process Act.
However, the applicants’ Counsel, Mr Robert Emukpaeruo, had urged the court to dismiss the defendants’ preliminary objection and assume jurisdiction. 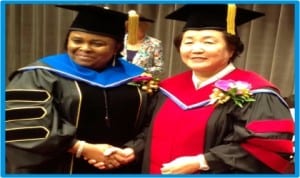