The abduction of Archbishop of Niger Delta Province, Most Rev. Ignatius Kattey has been described by Governor Chibuike Amaechi as an indication of the ineptitude of the police authorities in Rivers State to check crime.
Amaechi spoke last Sunday at the end of a three- day Port Harcourt International Fashion Week 2013 organised by the state government at the weekend in Port Harcourt.
He noted that since the present Commissioner for Police, Mbu Joseph Mbu assumed office, security in the state had deteriorated, but assured the citizenry that government would not allow the situation to continue.
He said,”…you can imagine the kidnap of Archbishop Ignatius Kattey. We were monitoring security very well before Mbu Joseph Mbu came, and kidnapping is now rampant. We have stopped them and you can see people move the streets freely. That was a mistake, we will never allow anybody kidnap our sons and daughters again.’’
He also challenged his political opponents to a debate,especially those who claim not to see development in the state.
“ When I first assumed office in 2007, Stadium Road was not like this but I expanded the road with street lights. We also created alternative to Aba Road, at least, to ease the traffic congestion. When we begin campaign for 2015 election, we will tell Rivers people the honest truth. We are ready to bring our opponents to a debate, we are ready for a debate’’.
Governor Amaechi also gave indication that during elections in 2015 in Rivers State, Rivers people would leave no stone unturned to ensure that justice and fair play prevailed.
Meanwhile, the Rivers State government has identified tourism development as the next most important economic imperative in the development of the state, after oil and gas.
Governor Rotimi Amaechi who stated this while addressing a World Press Conference to unveil the state’s 2013 Annual Cultural Carnival (CARNIRIV) and the presentation of Awards to last year’s winners in Port Harcourt said it was in appreciation that the state was paying premium to the sector.
Governor Amaechi who was represented at the event by the Commissioner for Culture and Tourism, Dr. Nabbs Imegwu, said government was doing everything possible to harness the potential of the state rich culture and tourism with a view to expanding its economy.
“Rivers is very rich in culture, with an amazing tourism potential which if properly harnessed can boost not only the state’s economy by the nation’s, beyond oil,” Governor Amaechi said.
He lauded the immense contributions of the local government areas and other participants in last year’s edition of the CARNIRIV, and made specific reference to the amazing heritage floats, street jamborees by the various councils.
While saying that the events had become welcome rallying points for tourists and citizens alike, Governor Amaechi urged the Rivers State Development Agency, local government councils, other participants and indeed all Rivers people to surpass the experience of last year.
Meamwhile, more than one thousand trees are to be planted during the forthcoming CARNIRIV. The Director General of the Rivers State Tourism Development Agency, Dr. Sam Dede who slated this at yesterday’s unveiling of the 2013 CARNIRIV said that the event would be used to mobilise the people to realise the damage being done to the government.
According to him, this year’s CARNIRIV with the theme: Our Environment, Bedrock for Sustainable Development” was specially chosen to instil a sense of greenness in the consciousness of the people.
Highlight of the event was the presentation of Awards to winners of the 2012 CARNIRIV.
The Okrika local government council emerged the overall winner in International Heritage Float (IHF), International Aquatic Fiesta and Rhythm of the tribe.
Ogu/Bolo came second with prize in International Heritage Float, and Rhythm of the tribe, while Obio/Akpor came third with prizes in International Heritage Float amongst others. 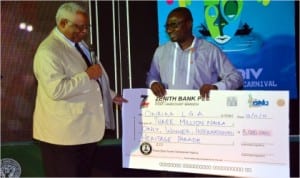 2015: Support For Jonathan, Not Compulsory -Abe …As Ake Urges Rulers To Be Impartial