The Rivers State Government, has promised to look into the issue of the allocation of stalls at the Rumuwoji (Mile I) Market.
The Permanent Secretary, Government House, Port Harcourt, Mr Fortune Oguru, gave the assurance on Wednesday during a protest by some traders of the market to Government House.
Oguru, who was  accompanied by the Permanent Secretary, Ministry of Local Government Affairs, Dr Justinah Jumbo, however, urged the traders to toe the line of peace in the resolution of the crisis.
On her part, the Permanent Secretary, Ministry of Local Government Affairs, Dr Justinah Jumbo said that the issue would be conveyed to the state Governor, Rt Hon Chibuike Amaechi, and urged the trades to also toe the line of peace.
In their protest letter entitled Diarchy: Overthrow  of your order in Mile One Rumuwoji Market Port Harcourt, the former chairman of the Market Traders Association (MOMTA), Chief Young Georgewill said that his removal as the chairman of the association by the Port Harcourt Local Government Council was not in line with due process.
He also said that the allocation committee of the market is now taxing people to pay exorbitant fees before allocation, noting that this situation has worsened the plight of traders.
The former chairman said that since his removal from office, the condition of the market had grown worse, pointing ut that the market presently has no running water and electricity, while the environment is dirty.
“The grass lawn made by the leader to beautify the market in line with the governor’s visionary leadership has been over-grown by weeds and uncared for while they collect N300 for security fee and N500 for electricity bills respectively, and yet with no service rendered, he said. 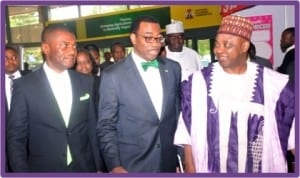