In the unfolding political drama in the country, a labour and political activist in Rivers State, Comrade James Kobah, has called on Ijaw leader and former Information Minister, Chief Edwin. K. Clark to leave the Rivers State Governor, Rt. Hon. Chibuike Rotimi Amaechi alone and refrain from witch-hunting him.
Comrade Kobah while bemoaning the political travails of Governor Amaechi, accused the Ijaw leader of misleading President Goodluck Jonathan in the current political crisis in the country.
He said Chief Clark did not show political wisdom when he recently called for the immediate expulsion of the Rivers State governor from the ruling Peoples’ Democratic Party (PDP) for alleged anti-party activities. He called on Clark to go home and “rest since he has nothing to offer Mr President”.
He added that the Ijaw leader should also be held responsible for the failure of the Jonathan administration.
Comrade Kobah spoke when he addressed a cross section of the media in Port Harcourt last Wednesday.
“Chief Clark says he has a new wife at 84. He should rest at home and manage his new wife. He should rest at home and enjoy his new wife since he has nothing to offer Mr President. We are not happy over what is going on now in the state, especially when people like Chief E. K. Clark are involved in misleading Mr President (Goodluck Jonathan). We want to ask him (Clark) to leave Amaechi and Rivers State alone. He can continue to deceive Mr President if Mr President decides to accept his advice. There is a crisis in which people, governors, national and state Assembly members are pulling out of the PDP and he’s still there deceiving Mr. President.
“When Amaechi became governor of this state, yes, most of us anticipated that he would have problems with some people because of his philosophy, his concept of government. You know he (Amaechi) is one who enjoyed justice to become governor of this state, so I think that influenced his character, and of course, his very first pronouncement was that this government is not a continuation of any previous government.  Government House was spending about N1.3 billion monthly on Government House. When Amaechi came in he cut it to about N400 million. This shows some level of prudence and commitment. There should be no bias about it.”
He described Governor Amaechi as a brilliant and focused political leader who should not be punished for ‘nursing’ any political ambition, if he has any.
Kobah emphasised the strategic importance of Rivers State in the electoral fortunes of the ruling Peoples’ Democratic Party (PDP), recalling that the state gave President Jonathan massive votes in the 2011 elections. “Whether we like it or not, Rivers State is critical to any election in this country”, he said.
On the prospect of the PDP reconciling its aggrieved members, the activist said while he would welcome reconciliation in the party, it would be dangerous for the country if the progressive-minded ones in the party would stop the struggle for true development on the altar of reconciliation.
He said, “If you believe in a cause which people have now bought into, why not, if they want to resolve, but it will be unfair for them and dangerous for this country that the progressives that have emerged collapse under any form of resolution, negotiation, except their idea of development should go on. I am one man who doesn’t believe in being loyal to stupidity. I never did that in my life. What I believe in is what I follow”.
He noted that the Rivers State governor would not be subdued by his political enemies because God is on his side. Again, he said Governor Amaechi succeeds because there is some level of justice in all the actions he had taken.
“Of course, you can see that Amaechi’s cause is being fought by God. There is no way he could have survived in the system till today if God is not on his side, and so, every action anybody takes without some dosage of justice in it, doesn’t survive.
“Amaechi is succeeding today because there is some level of justice in all the actions he had taken. So we are not happy about what Chief Clark is doing. I think that he is making Mr President to fail both in his administration and even his second term ambition, he said. 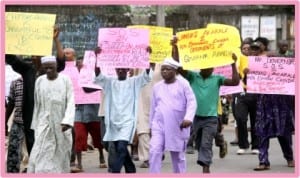 MEND Flays Ex-Militants Over Threat On Amaechi, Others