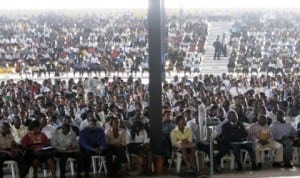 Crowed of applicants at the job fair organised by Rivers State Sustainable Development Agency, at the University of Science and Technology, Port Harcourt

Out of 6,033 applicants, about 3,225 were on Tuesday screened for the 600 job openings in the Rivers State Sustainable Development Agency (RSSDA’s) Job Fair in Port Harcourt. However successful applicants will have the opportunity to interract with representatives of 120 employers of labour involved in the scheme’ for possible engagement.
RSSDA is partnering with the Rivers State Ministry of Empowerment and Employment Generation to organise the first-ever public sector-driven job fair on August 20, 2013, in the state.
The screening exercise, which commenced last Wednesday at the Rivers State University of Science and Technology (RSUST) ended yesterday, with numerous qualified applicants optimistic of their chances of employment come, next Tuesday.
The Tide learnt from indusrty sources that about 120 employers of labour have registered to take part in the job fair.
It was gathered that on the list of registered employers of labour for the job fair are Shell Petroleum Development Company (SPDC), Garden City Microfinance Bank, Standard Chartered Bank Nigeria Limited, Federal Inland Revenue Service, and Golden Tulip Hotel, Port Harcourt.
Others are Schlumberger Limited, Rockson Engineering & Construction Procurement Oil & Gas Company Limited, Team Engineering Company Limited, JC International Limited and Zenith Bank Plc.
The rest are United Bank for Africa Plc, Skye Bank, Genesis Group Nigeria Limited, and Lumbegh Services Limited, among others.
It would be recalled that the job fair is an important step in the state government’s efforts through the RSSDA, to provide employment opportunities for a good number of unemployed youths in the state.
Meanwhile, the sterling success recorded by physically challenged beneficiaries of the Rivers State Sustainable Development Agencies’ overseas scholarship programme have opened doors for many more to explore and excel in their chosen career.
A beneficiary of the Rivers State Governor’s Special Overseas Scholarship and inmate of the Port Harcourt Chestire Home, Miss Betty Alali Odema stated this in Port Harcourt, recently.
Odema, who said this in an exclusive interview with The Tide, noted that the programme was the greatest thing to happen to physically challenged persons in the state.
Miss Odema, who hails from Abua and a graduate of Nothingham Trent University  in the United Kingdom (UK) under the special overseas scholarship programme , also emerged winner of the institution’s Vice Chancellor Award and the British Council’s Best Graduating Student Award.
Odema said that it was the first time that physically challenged persons were being incorporated into any scholarship programme in the state since its creation in 1967.
She also said that the programme seems to be favouring more children from poor than rich homes in the state.
According to her, the development was in line with Governor Chibuike Amaechi’s policy of  extending equal opportunities to all classes of persons, irrespective of social backgrounds.
Odema said that apart from herself, six other inmates from the home were on the scholarship programme in the same university noting that the development  has shown that physical deformity was not a barrier to academic excellence.
She said that 180 students from 180 countries competed for the Vice Chancellor award, which she eventually won.
Odema, however, said that the six of them are now facing the challenges of unemployment.
In her word, “ there, I was offered a job, but I decided to come back home to pay back what the government has done for me.
“But now, there is no work for us”, she said.
She attributed the development to the unwillingness of the Nigerian society to fully integrate the physically handicapped in the society, arguing that the situation must change.
Miss Odema, however stressed the need for sensitization of members of the society to see the physically challenged persons as bona-fide members of the society and given equal rights and opportunity to compete in all fields, including education and employment.

Politics Of The Pocket …Another Look At Senator’s Jumbo Pay