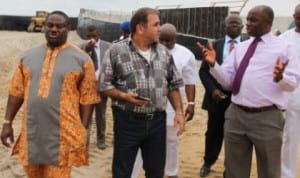 Rivers State Governor Rt. Hon. Chibuike Rotimi Amaechi,(right) Managing Director of Raffoul Construction, Elie Raffoul (middle) and the State Deputy Governor Engr. Tele Ikuru, inspecting the site of the set of bridges and roads that will connect Woji-Elelenwo-Akpajo and Abuloma with a seur to the East-West Road in the outskirts of Port Harcourt being constructed by the Amaechi administration, Wednesday

Envy Not INEC …Beyond APC Registration