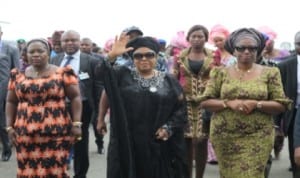 Dame Patience Jonathan (middle) flanked on the left by the wife of the Bayelsa State Governor, Mrs Seraike Dickson and Dame Judith Amaechi, during the First Lady visit to Port Harcourt over the death of her mother ,Mrs Charity Oba