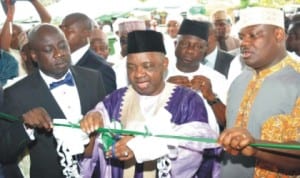 Director-General of the Nigeria Governor’s Forum (NGF) , Mr Asishana Okauru says Rivers State Governor ,Rt Hon Chibuike Amaechi is the authenctic chairman of the body.
Mr. Okauru made the clarification during a chat with newsmen on Friday in Port Harcourt when he and officials of the NGF secretariat visited the state.
Okauru disagreed that there was division in the forum and dismissed claims of another secretariat formed by some dissident governors saying he is the DG of the body and still remains so.
Said Okauru, “please, there is one secretariat I can tell you that. I’am in contact with the 36 governors, and there is only one secretariat’’.
Asked whether the division that trailed the forum’s elections in May have been settled, he responded,” It is an issue for the 36 governors and they are discussing about it… and there are issues they are trying to resolve and we have a chairman and I’am the DG’’.
On who won the elections, Okauru declared,” the Governor of Rivers State’’.
Meanwhile,National Coordinator of States Peer Review Mechanism for MDGs, Dr. Jerome Afeikhena has praised the world class projects executed by the Amaechi-led administration. He said the projects put the state at a better stance to meet with state assessment index.
He disclosed that already Anambra and Ekiti states have completed the process,” the way it works is that a state will first of all do its own assessment, it’s only then that the panel of eminent persons led by former Supreme Court Justice, Mohammed Uwais will with his team come and take stock after which their report will be presented to governors’’.
On his personal assesssment of projects so far executed in Rivers State, Dr. Afeikhena observed,” as I have earlier told you, the projects we visited today are absolutely wonderful. They stand their own in any part of the world. We are very encouraged ‘’.
Meanwhile, Rivers State Governor, Chibuike Amaechi, has said he would remain on the path of principle as Chairman of the Nigeria Governors Forum (NGF).
He stated this in Port Harcourt on Saturday when staff of the NGF Secretariat under his leadership visited him.
Amaechi enjoined the staff to remain neutral in the face of the forum’s current leadership crisis, assuring them of regular salaries.
He took advantage of the visit to undertake an unscheduled inspection of some ongoing and completed projects within the state capital.
This, according to the governor, was to acquaint them with projects embarked upon and those completed by his government.
Some of the projects visited included the Kelsey Harrison 120-bed Hospital, some model primary schools and the 38,000 sitter stadium complex.
He expressed displeasure over “breach of some contract agreement’’ by the handlers of the hospital.
He phoned the Commissioner for Health to write the managers to correct the identified breaches or have the contract revoked.
Others visited were the ongoing health centre within the Rivers State University of Science and Technology (RSUST) complex, the state Conference Centre and some completed road projects.
Amaechi called on the contractors to be up to their responsibilities or have their contract re-determined.
He said government was constructing 500 modern primary schools across the state, adding that 250 of the schools would be commissioned in October.
This, he said, was to address the shortage of primary schools in the state.
Mr Asishana Okauru, Director General of the NGF Secretariat who led the staff on the visit, expressed satisfaction with the projects inspected.
“We are very impressed by the institutions and infrastructure on ground here. It shows that Rivers is a modern state’’, Okauru said.
According to him, the facilities inspected are comparable to those in most advanced countries of the world.

Akawor, A Liability To Oyigbo …As Amaechi’s Aide Carpets Ambassador