The Federal Ministry of Environment yesterday, in Abuja, predicted heavy rainfall which could cause flooding between now and July 17 in 22 states.
The ministry’s Deputy Director in charge of Erosion, Flood and Coastal Zone Management, Mr Ekong Ekanem,  made the announcement in a statement.
The ministry listed the 22 states to include Bayelsa, Osun, Kwara, Edo, Taraba, Adamawa, Delta, Borno, Plateau, Jigawa, Yobe, Zamfara, Niger and Kebbi.
The rest are Kaduna, Sokoto, Kano, Bauchi, Katsina, Oyo, Gombe and Nasarawa states.
It also identified some towns which could be affected by flooding to include Ekeremzi and Kolokuma-Opokuma in Bayelsa; Igbo-Ora in Osun; New Bussa in Kwara and Akoko-Edo in Edo.
Other areas are: Beli, Donga, Lau and Yorro in Taraba; Jimeta, Song, Mayo Belwa, Mubi, Demsa and Ganye in Adamawa; Kachia, Kauru, Jema’a and Saminaka in Kaduna state.
The ministry also listed Kangiwa, Shinkafi, Silame, Sokoto and Wamako in Sokoto state; Kano, Bebeji, Wudil, Tudun-Wada, Sumaila, Kunchi, Karaye, Gezawa and Gwarzo in Kano state.
It further listed Bauchi, Katagum, Azare, Bajoga, Yelwa, Tafawa Balewa, Itas, Misau, Darazo and Jama’are in Bauchi state; Katsina, Bakori, Funtua, Daura and Kaita in Katsina state; and Bomadi in Delta.
The flood-prone areas included Geidam in Borno; Bokkos, Shendam, Jos and Mangu in Plateau; Dutse and Gwaram in Jigawa; Potiskum, Kanamma, Damaturu, Dapchi and Gashua in Yobe.
“Areas which can be affected by the downpour-induced flood include Aiyete, Ibadan, Eruwa and Iseyin in Oyo state; Kaura Namoda in Zamfara; Nafada and Gombe in Gombe state.
“The rest are Bungudu in Kebbi; Keffi and Lafia in Nasarawa state; Sarki/Pawa, Suleja and Wushishi in Niger,’’ the statement said.
The ministry, therefore, appealed to governments in the identified states to take all necessary precautionary measures to avoid any untold hardship on the people.
It added that adherence to similar warnings in the past had saved many peoples’ lives and property.
Our correspondent recalls that 22 states of the federation were affected by flooding in 2012. 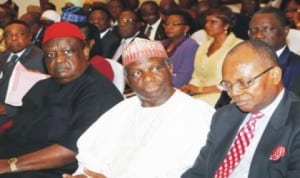