Civil society organisations in the Niger Delta have called on the embattled Commissioner of Police in Rivers State, Mr. Mbu Joseph Mbu to apologize to the people of the state for describing Governor Chibuike Rotimi Amaechi as a tyrant and dictator.

The organizations have also called on the Presidency, the Police Service Commission (PSC) and the Inspector-General of Police, Mr. Mohammed Abubakar, to immediately remove Mbu from the state and demote him.

In a statement in Port Harcourt, the groups, under the aegis of Niger Delta Civil Society Coalition (NDCSC), said; “In the general public interest, Commissioner Mbu should apologise to the peoples of Rivers State, the governor, and should be removed from Rivers Police Command, disciplined and demoted forthwith.”

The statement, which was signed by NDCSC Chair, Anyakwee Nsirimovu, stated that the members of civil society organizations in the Niger Delta region would embark on a protest to defend democracy and the rule of law if the commissioner of police fails to apologize and leave the state.

It said; “Failure to remove the Commissioner from Rivers state shall force critical civil society membership of the Doing Democracy Movement (DDM) to organize and prosecute a peaceful protest in Defence of Democracy and the Rule of Law shortly to drive home its position.”

The statement further said; “NDCSC is shocked beyond words to learn that the Rivers State Police Commissioner, in an interview credited to him in a number of national newspapers, referred openly to the governor of Rivers State as a tyrant and dictator, a rage, unparallelled, executive rascality unbecoming of a senior professional police official and without any shadow of doubt, contrary to the code of ethics of a people oriented police service. This is wholly unprofessional, unacceptable, therefore unequivocally condemned.

“NDCSC in serious protest therefore, reemphasize the earlier petitions of civil society groups in the region, to the effect that the commissioner’s continuing stay in Rivers State Police command can only be counter-productive, undesirable and  adds no value whatsoever to any constitutional object  behind any of such posting.

“The Commissioner has proven beyond any reasonable doubt, following his untoward behaviour and vituperations, that he is an official, craftily drafted to Rivers State to do a hatchet job. Commissioner Mbu assumed the position of an alternative governor or better still, Sole Administrator, in daily competition for control of the political space with an elected governor in a democracy.” 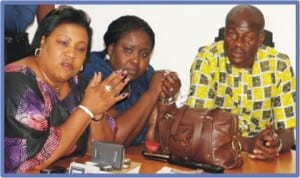