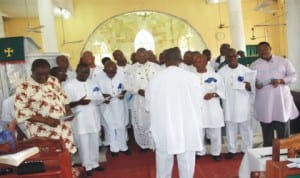 Amaechi, in a statement yesterday, said Jang had been going around parading himself as the chairman of the NGF, whereas there could not be two chairmen for the body.

Amaechi said that the Plateau State governor, who declared himself the chairman of the NGF after losing in an election to him by 19 votes to 16, had now gone further to call a meeting of the forum for Monday.

He said the only meeting he was aware would hold on Monday in Abuja was the one with President Goodluck Jonathan in Abuja.

He therefore charged his fellow governors to ignore the meeting called by Jang, adding that the crisis in the NGF, like any other before it, would soon pass away.

The statement by Amaechi reads in full.

“On Saturday, June 15 and Sunday, June 16, reports in the media credited to my brother governor, Governor Jonah Jang of Plateau State alleged that he has called for a Nigeria Governors’ Forum meeting. Ordinarily, I would have ignored these reports as I do not imagine that as governors who hold our people’s mandate through the democratic process of free and fair elections, we would do anything to impugn our integrity or threaten our nation’s fledgling democracy.

“However, as chairman of the Nigeria Governor’s Forum, elected by my colleagues to safeguard their integrity and that of the forum, it has become imperative for me to request my brother and Governor Jang to remain within the confines of decorum and cease to impersonate me and to stop parading himself as NGF chairman. There is only one chairman of the forum, duly elected by a vote tally of 19:16 on Thursday, May 23, 2013.

“For the avoidance of doubt, I as chairman of the NGF have not called for any Governors’ Forum meeting for Monday, June 17, 2013. The only meeting scheduled for Monday, June 16, is a meeting of all Governors with His Excellency, President Goodluck Jonathan, to hold at 9pm at Aso Rock Villa. All governors should please ensure attendance at this meeting with Mr. President.

“I wish to reassure my brother governors that this storm shall pass and we all will be reunited as one family committed to our nation’s unity and supporting Mr. President in his vision for a Nigeria that safeguards the rights of all its citizens to good governance and democratic norms.

“Governor Jang is my brother and friend and I harbour no ill-feelings for him, but it is important that he stops this impersonation, as it is an ill-wind that threatens to spoil all the good works we all have done together.

“May I remind Governor Jang that there is a legal action that has been instituted against him by Governor Babatunde Fashola of Lagos State from parading himself as the chairman of NGF. As leaders elected by our people, Nigerians are closely watching and monitoring, as such, we must comport ourselves according the dictates and principles of democratic and lawful practices and norms.”