The Rivers State Government has stated that the National Working Committee of the Peoples Democratic Party (PDP) has no right following the party’s constitution to sanction or suspend a Governor of any state.

The Rivers State Commissioner for Information and Communications, Mrs Ibim Semenitari who made this known in a radio programme, in Port Harcourt, ‘’View Point’’  last Saturday ,noted that the suspension of Governor Chibuike Amaechi was in error if the party constitution was strictly followed.

Mrs  Semenitari  explained that only the National Executive Council (NEC) had the right  and powers  to suspend a governor after its meeting which must consist of all members of the NEC.

‘’But regrettably , there was no meeting of the NEC where the decision was taken before Chief Olisa Metuh announced the suspension. The suspension was done by the National Working Committee (NWC),so it was done in error,’’ she said.

The commissioner further denied allegations that the state governor, ordered the Rivers State House of Assembly to suspend the Chairman and  councillors of the Obio/Akpor Local Government Council ,stressing that the Assembly was independent of the executive.

She noted that matters that had to do with local government area were within the purview of the Assembly as contained in the Local Government Law of Rivers State.

‘’Governor Amaechi did not order or direct the Assembly to suspend the Obio/Akpor chairman and other members of the legislative arm’’, she said.

While explaining  reasons why the state government wanted the redeployment of the state Commissioner of Police, Mr Mbu Joseph Mbu, Semenitari alleged that the government had seen some security breaches in the state in recent times, adding that the issue of ex-militants protesting to Government House and track records of security management of the commissioner in his previous assignments were also some of the reasons.

According to her, ’’It is important that under his watch, things have not changed, rather, things have degenerated under his watch. The Governor is the Chief Security Officer, but not in control of the police. Police is under the Federal Government. What happens is that the governors work in synergy with the police to ensure security and provide support, if necessary’’, she noted. 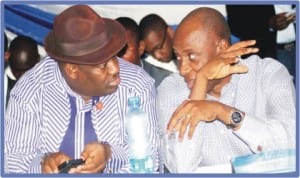