The Director-General of the State Emergency Management Agency (SEMA), Mr Vincent Aquah,  in Cross River State has called for relocation of some communities in the state.

Aquah, who particularly identified Eja in Obubra Local Government Area and Agwagune in Biase as communities that must be immediately relocated, said that the measure was necessary, ahead of Nigerian Meteorological Agency NIMET’s prediction of heavy flooding in flood-prone states in 2013.

He told newsmen yesterday in Calabar that “these communities will be totally wiped out if the predicted flooding in 2013 occur’’.

He said that if nothing was urgently done to provide buffer in some areas, most communities in Cross River would be permanently dislocated by fresh flooding.

The director-general noted that the Nigerian Meteorological Agency’s (NIMET) forecast of flooding this year in states, including Cross River, had posed serious concerns to SEMA, adding that the agency might lack the capacity to deal with the imminent disaster.

The SEMA boss recalled that Cross River was one of the states in the country that suffered harsh consequences of the 2012 flood disaster, noting that more than 49,000 people were displaced by the flood.

He said that 212 communities, 1,800 houses and 82,361 farms were destroyed by the flood, adding that 13 lives were lost, 34 persons suffered severe injuries, while 18 markets, 15 churches and 13 schools were also destroyed.

The director general said that Agwagune community lost about 90 per cent of its habitable land to the flood, stressing that “if NIMET’s prediction is anything to go by, Agwagune may be completely wiped out. The people require quick relocation.’’

Meanwhile, the Rivers State Government has flagged off tree planting campaign in the state as part of its mothers earth project.

The commissioner for Environment, Dr Nyema Weli, who planted a tree at the Isaac Boro Park in Port Harcourt, last Saturday to flag off the exercise, said  it was part of the  government’s commitment towards greening the environment.

Dr Weli said that with the flag-off of the exercise, it was expected that both indigenes and non-indigenes of the state would participate actively in the exercise by planting trees in their domains.

Meanwhile, the Rivers State Government has said that it has concluded arrangement towards the celebration of this year’s World Environment Day slated for Wednesday.

Commissioner for Environment, Dr Nyema Weli, who spoke to newsmen shortly after this month’s environmental sanitation exercise last Saturday in Port Harcourt, said that the celebration, which has as its theme “Think, Eat and Save”, was very significant as man’s activities were affecting the  environment.

He said that time had come for people to think of ways of conserving natural resources for the unborn generation, noting that the celebration was designed to send a message to mankind “to think about those things we do that affect the environment.

The commissioner also urged people, particularly farmers, to discourage bush burning as it was dangerous to the environment, explaining that bush burning kills all mirco organisms that mankind depends on for his existence.

Dr Weli, who monitored the  sanitation exercise in some parts of D/Line, Port Harcourt, warned residents of Awka Street to desist from further discharging sewage into the streams.

He said that such activities were not only dangerous to their health but that of the entire state.

The state Director of the National Orientation Agency (NOA), Mr Oliver Worlugbom, who monitored the exercise with the commissioner commended the ministry of Environment for translating the vision of the governor into reality. 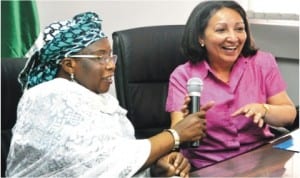 Minister of Women Affairs and Social Development, Hajiya Zainab Maina (left) with the new UNICEF Country Representative, Jean Gough, during a familiarisation visit to the minister in Abuja, last Friday