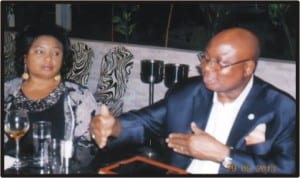 Selfish interests and lack of basic ideologies have been identified as a major cause of intra-party crisis in Nigeria, according to Governor Chibuike Amaechi, and other prominent stakeholders who spoke at the first state Inter-Party Forum held last Tuesday in Port Harcourt.

Rt. Hon Amaechi who declared the forum open revealed that many politicians were in politics just to enrich themselves to the detriment of the citizenry, citing the current intra-party crisis rocking the PDP as one of the examples.

“Those fighting me say the problem is not schools, is not roads, is not light, is not hospitals what about stomach infrastructure,” Amaechi declared.

The governor was of the view that it was difficult for all members of a party to share the same view and therefore reasoned that defence of public good should be above all interests. He said legacy must be the driving force of every politician.

“I tell my children when we converge that they have to work hard to make history. And again as a student a student of history everyday with your activities you make history…but there are histories that the world would want to read if there is no history that I have made, the one God has made me to make is the one that I have stood out and fight for my right’’ the governor said.

He charged all the parties to jettison their differences and stand up to fight for the right of the Rivers people considering the current political developments in the state, “ whether you belong to PDP or APC’’ he stressed.

From now onwards, he challenged all the parties to stand up to defend the rights of the people on the basis of ‘’one man one vote’’, asserting that most often in Nigeria parties win elections without the people’s votes and therefore can afford to carry out anti-people policies without fear of losing the next elections.

In his remarks earlier, Chairman of the occasion and former Supreme Court judge, Justice Adolphus Karibi-Whyte called on political parties to be patriotic and to pursue policies that will move the country forward.

Justice Karibi-Whyte decried the situation where parties have been dominated by ethnic sentiments saying, “ No politics, no patriot thinks for himself ,but thinks for others.’’

He used the forum to congratulate the governor on his re-election as chairman of NGF, “ We admire Governor Amaechi because of his performance, he is doing everything to succeed and drive the institutions of democracy’’.

Also speaking, Senator representing Rivers South- East Senatorial District, Magnus Ngei Abe urged politicians to play politics by principle, warning that parties in Nigeria had evolved basically to grab power and not to affect the lives of the people.

Senator Abe observed, “ cohesive inter-party relations in Rivers State will be beneficial only when politics is played by principle.’’

Coordinator of the forum and Special Adviser to the governor on Inter-Party Matters, Barrister Solomon Chituru Ebeku disclosed that the conference is the first in the state and geared at creating one platform to aggregate the views and activities of political parties in the state.

Barrister Ebeku called for synergy among the political parties capable of driving development, peace and unity, pointing out that lack of understanding among politicians was responsible for the huge litigations and lawsuits after elections.