Members of the House of Representatives yesterday passed a resolution endorsing the state of emergency declared by President Goodluck Jonathan in Borno, Yobe and Adamawa States on May 14.

Our correspondent reports that the members adopted the resolution after a four-hour executive session.

During the session, the members deliberated on the Gazetted copy of the proclamation of the state of emergency sent to the House by Jonathan.

The Speaker, Alhaji Aminu Tambuwal, who read the proclamation on the floor of the House, said that the resolution was in line with the 1999 Constitution as amended.

According to Tambuwal, the constitution specified that that two-third attendance of members was required to approve the proclamation.

He said that the 253 members in attendance at Tuesday’s executive session surpassed the number required by the constitution.

The speaker said that the House considered the approval clause by clause with some amendments.

According to one of the amendments, the President shall transmit proclamation of emergency rule to the National Assembly after three days of the proclamation.

Tambuwal promised that the House would “give all support needed” to the security operatives to enable them succeed in their operations.

He, however, cautioned the operatives to be mindful of law abiding Nigerians, who are not involved in the security threat and urged them to operate within the rules of the game.

The speaker appealed to the insurgents to accept the hand of friendship extended to them by the Federal government.

Meanwhile, the House has constituted a six-man conference committee to work with the Senate to harmonise the proclamation from the two chambers of the National Assembly.

In a related development, the Senate after over an hour  in a closed door meeting yesterday through a unanimous voice vote approved President Goodluck Jonathan’s last week declaration of state of emergency  in Adamawa, Yobe and Borno, urging the Federal Government to ensure adequate funding of the operation while the troops must adopt only actions within the rules of engagement.

According to the  Senate President, Senator David Mark and the Chairman, Senate Committee on Information , Enyinnaya Abaribe, the Senate went into closed door to enable the members discuss extensively and  speak frankly on the issue and to avoid unnecessary persecution  by some “mis- informed” members of the public and to ensure that the entire Senate takes responsibility for approval

or disapproval of the emergency rule declared by President Jonathan.

The strategic closed door meeting  was however able to draw a voice approval of the whole 100 Senators who attended yesterday’s plenary, including the ACN Senators whose party had collectively stood against the state of emergency rule as no dissenting voice was heard at the voice voting.

Senate President, David Mark, noted that it was very important that  adequate funding   for the operation is ensured  by the Federal Government  for a hitch-free operation, emphasizing that all democratic structures shall remain on ground and enabled to participate actively in the peace process.

Mark harped on the need to ensure that the peoples suffering be alleviated and not forced to go through further inhumane treatments.

His words: “In the closed session, we extensively discussed some of the issues that we think are very important to this proclamation of state of emergency.

“We want to emphasise in fact, and very emphatically, that all democratic structures must be left in place and must be allowed to operate fully and actively. And they must also be involved in all the

efforts that the Federal Government is putting up to bring this ugly situation to an end. We also would like to emphasise that the armed forces should be issued a proper code of conduct where they will be humane, benevolent and make sure that all citizens are treated with utmost respect so that they do not loss their respect as human beings.

“We are conscious of the fact that the government is taking this step as the last resort, but alongside that, we want to encourage the government to also urge the committee on amnesty to work

alongside the current functions that are put in place to bring this to an end, so that at the end of the day, government can concentrate on their efforts to win the minds and hearts of the people in all the states that are affected”.

Mark also urged the Boko Haram insurgents in the states to cooperate with the troops  to ensure that a permanent solution to the crisis is achieved,  adding that the amnesty committee should also work with the authorities in the states towards resolving the problem.

“But we would also like to remind the commander-in-chief that the Federal Government must fund the operations properly and adequately.  We also would like to remind them that as operation is going on, relief materials and all medical materials should as quickly as possible be moved into the area so that the people can benefit from government presence

“We are conscious of the fact that this problem ought to have been brought to an end long ago but it is better late than never.  I want to appeal to the Boko Haram insurgents and terrorists, that it is still not too late to cooperate with the forces that are there in Borno, Adamawa and Yobe states so that we can bring this to a logical conclusion as quickly as possible”.

The Senate President while  admitting that military power is not the solution to the problem, said it is only meant to cater for the people’s interest, and advised the Federal Government to take every step to hasten the peace pocess and not forget the need to rehabilitate the states when normalcy returns.

At the end of his remarks, Mark put the question on the approval of the state of energency on the three states and got a unanimous voice approval from the 100 senators at plenary.

Briefing  Senate correspondents, Senator Enyinnaya Abaribe, said that the Senate was committed to resolving the crisis, pointing out that any supplimentary budget requested by the executive  for the funding  will be approved by the National Assembly in due course. 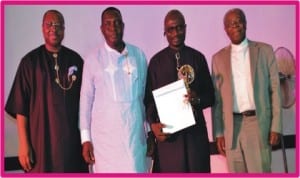