Stakeholders from Obio/Akpor Local Government Area have described Governor Chibuike Amaechi as God’s sent, hence had expressed hope that he will scale through all ongoing political persecutions.

The stakeholders pledged their support at a special forum by the people of the area in Port Harcourt.

Caretaker Chairman of the Council, Hon. Chikordi Dike while addressing thousands of Obio/Akpor men and women said, “ Governor Amaechi should not be distracted, he is God’s anointed and no one can touch God’s anointed. No one can battle with the Lord.

He urged the citizens and indigenes of the local government area not to be perturbed by the current political developments as it will be soon be over.

Dike reasoned that the way and manner the people of the area had shown maturity even in the face of aggravation is a strong indication of their resolve to end the crisis through peaceful means, while urging them to maintain the tempo.

Dame Tamuno urged the people of Obio/Akpor to be steadfast and always stand by the truth, arguing that the suspension of the former council boss was done in line with the law, “what the Rivers State Assembly has done is to investigate and investigation can be done when the accused has been suspended’’.

Earlier, Peoples Democratic Party (PDP) chieftain in the state, Elder Chidi Wiyokah had commended the people for remaining peaceful despite the situation, pointing out that they have shown that council belongs to them as they cannot destroy what belongs to them.

While urging the security authorities to rescind their action, Wiyokah lamented that the continuous closure was inhuman as workers of the council have not been paid for the past two months.

Former legislators in the state and National Assemblies, Hon Collins Ordu and Ike Chinwo also flaked those responsible for the closure of the council as detractors, saying the council does not belong to anybody, but a confederation of various communities and people. 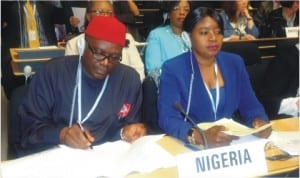