Barely 24 hours after a Federal High Court in Port Harcourt  ordered the Nigerian Police to allow workers and staff to have access to the sealed Obio/Akpor Council Secretariat , an explosion has rocked the council headquarters.

The incident The Tide learnt occurred about 12.30pm as police was said to have vacated the council premises  around 12.00pm yesterday.

When The Tide arrived at the scene of the incident, smoldering smoke was still gushing out from the generator house where the explosion was said to have been set off.

Firemen from the state Fire Service were seen struggling to put out the fire which tore open the roof of the building housing the generator house.

Caretaker chairman of the Local Government Council, Hon Chikordi Dike told pressmen shortly after the fire was brought under  control that his office was equally burgled.

Dike said he would have resumed work yesterday after nearly two weeks of being bared by police but for delay by the Divisional Police Officer (DPO) of the area, who alleged that it has not received order to leave the secretariat complex.

Said Dike, “ at about  12pm I learnt that the police was leaving the premises.. 30 minutes later I got information that they have bombed the generator house”.

The Obio/Akpor CTC chairman told pressmen that the police failed in carrying out its responsibility and had shown complacency even when a bomb threat had been made by those he said were loyal to the suspended council chairman.

He alleged that before and while the matter was going on in the courts, the police had shown that they were taking sides in the case and therefore fell short of carrying out their constitutional responsibility of protecting lives and property.

An earlier statement from council indicated that some ex-militants who are supporters of the suspended chairman had threatened to deploy violent approach if the police were withdrawn from the council.

The said group also allegedly threatened to make the state ungovernable if the state House of Assembly refused to rescind its decision to restore the suspended chairman.

Against this backdrop, Hon Dike called on the people of Obio/Akpor to remain peaceful and law-abiding as perpetrators of the dastardly act would be fished out.

Meanwhile, a Federal High Court sitting in Port Harcourt on Monday said it was unlawful for men of the Nigerian Police force to take illegal occupation of the Obio/Akpor Local Government Council Secretariat in Rivers State when there was no proclamation of an emergency rule in the area, and there by ordered the immediate withdrawal of the  detachment of policemen deployed to seal the council secretariat for the past ten days.

The Trial Judge, Justice H. A. Nganjiwa while delivering his ruling on an application brought by the Obio/Akpor Local Government Council Caretaker Committee led by Mr Chikordi Dike and others seeking for an interlocutory injunction to declare that the sealing of the council secretariat by men of the Nigerian Police Force (NPF) was illegal, and  urged the  Federal Government not to allow any of its agencies to drag her name in the mud.

He declared that sealing the council secretariat by police was illegal and ordered the Inspector-General of Police, Mohammed Abubakar to immediately withdraw all the policemen in the area in other to allow the CTC members, workers and members of the public unfettered access to the council to perform their legitimate duties pending the determination of the substantive suit.

He further declared that any body who contravenes the order will be prosecuted according to the law, and urged the parties to maintain the status quo. 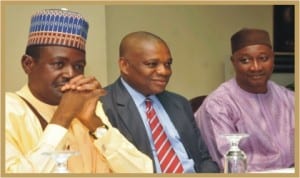 FG Slams State Of Emergency On Yobe, Borno, Adamawa …‘We Will Gun Down Terrorists Anywhere’