Rivers State Governor, Rt. Hon. Chibuike Rotimi Amaechi, has charged the House of Representatives Adhoc Committee not to delay in passing the Petroleum Industry Bill (PIB) which has suffered serious setbacks on the floor of the National Assembly.

Governor Amaechi who gave the charge last Monday when the committee led by its Chairman, Hon. Ishaka Bawa visited him at Government House, Port Harcourt lamented that six years after the bill was sent to the National Assembly, it had not been passed into law.

Represented by his Deputy, Engr Tele Ikuru, Governor Amaechi  noted that “anyone who hears about the PIB and the fact that it has been on the table of the National Assembly or between the Federal Government and the National Assembly for well over six years now from the time it commenced will be thoroughly worried.

The governor further observed, “we as a people are not players in the oil industry, something must be thoroughly wrong,” the governor, who is also Chairman of the Nigerian Governors’ Forum (NGF), stated that “a bill of this nature should not stay more than one or two months wherever it finds itself,” asserting that due to the importance of the bill, it should be given accelerated attention.

He, therefore, urged the committee members to expedite action considering the importance of the bill, lamenting that the “country has been producing crude oil for almost sixty years but still imports petrol to run its vehicle, imports kerosene to light its stove, imports diesel to run its factories. It is amazing that the people whose backyard where these things are taken every day still live in absolute penury and nobody is worried,” encouraging them to “expedite action on the bill and allow your name to be written eventually in gold as it concerns the economy of this country”.

Earlier, the Chairman of the committee, who is also the Chief Whip of the House of Representatives, Hon. Ishaka Bawa, told the Governor that they were in the State to give the people the opportunity to make critical inputs into the process of passing the PIB into law, noting that “instead of having discussions on the PIB only on the floor of the House, we decided to bring it to the open and offer Nigerians the opportunity to make inputs into the process,” assuring that “the decision of Nigerians will prevail at the end of the day.

Bawa, who made the call at the opening of the zonal public hearing on the proposed PIB organised by the committee last Monday in Port Harcourt, said public input is crucial to legislative actions.

The chairman said the House resolved to simultaneously organise public hearings in the six geo-political zones of the country to provide an opportunity for Nigerians to express their opinions on the bill.

Bawa said the bill, when passed into law, would address the various irregularities in the oil and gas industry.

“Corruption, indiscipline, strange criminalities such as bunkering and vandalism have assumed unacceptable proportions in the industry,” he said.

The lawmaker said the public hearing would provide an opportunity for stakeholders, civil society groups and host communities to offer advice and make constructive inputs to provisions of the bill.

According to him, the fund had yet to give adequate attention to the host communities who suffer the impact of oil exploration by the oil companies.

Dagogo decried the high cost of petroleum products in rural and host communities.

“As soon as you leave Port Harcourt city to our localities, you get petroleum products three times the price in Port Harcourt and this is unhealthy for our rural dwellers,” he added.

He advised the Federal Government to ensure that pipelines were connected to the rural areas to stabilise the cost of petroleum products in the country.

Dagogo also said that to stop gas flaring in the country, penalties on gas flaring should be made 10 times higher than what it is now.

He said the step, if taken, would encourage oil companies to work out modalities for a better alternative to gas flaring.

Dagogo also urged the Federal Government to include science and technology in its transformation agenda, saying that no country could develop by relaying 100 per cent on imported products.

Public Relations Officer of the Bonny Kingdom Study Group, Mr Alfred Alison, said that in as much as the host communities were expected to suffer some hazards of development, they should not be neglected.

“Oil and gas activities have impacted much on the communities, if you flare gas in Bonny and pay fines to the federation account, how then does host communities benefit from the penalties.

“You cannot flare gas and pay fines into the federation account and those from the Niger Delta region begin to share whatever that is there with those who are not suffering from the activities of oil exploration.”

Alison called on the government to respect and involve host communities in determining who should benefit from the penalties on gas flaring.

In another development, Rivers State Governor, Rt. Hon. Chibuike Rotimi Amaechi, has sworn-in a new seven member Caretaker Committee to pilot the affairs of Obio/Akpor Local Government Council with a charge to them to conduct the affairs of the council with prudence and dilligence..

Amaechi gave the charge through the Secretary to State Government, Mr. George Feyii who swore-in the caretaker committee members in Government House, shortly after they were screened by the State House of Assembly yesterday in Port Harcourt.

Governor Amaechi called on members of the committee to exhibit high sense of dilligence in carrying out their assigned responsibilities, and urged them to display behaviour worthy of public trust by ensuring that council resources are utilised judiciously.

“We justify the confidence reposed in you by giving you this appointment to show diligence and manage the resources of the local government with every sense of responsibility,” he said.

“You do not have the freedom to conduct yourselves in a way that will not be befitting of the responsibility that has been placed on you. And we have confidence that you will do that, and the best way you can do that is to conduct yourselves positively. I congratulate you all in your new appointment as caretaker committee of Obio/Akpor Local Government Council,’’ he further remarked.

Meanwhile, the newly sworn-in Caretaker Committee Chairman of Obio/Akpor LGA, Dike David Chikordi has dissolved all standing committees of the council, expressing assurance that new committees would be constituted in no distant time.

Chikordi assured the people of Obio/Akpor that he would continue to promote the vision of Governor Amaechi to ensure dividends of democracy in the LGA, and promised to inject new blood in the effective management of the council to achieve desired results.

It would be recalled that the inauguration of the caretaker committee followed a resolution of the state Assembly that suspended the elected chairman, Prince Timothy Nsirim and his councilors last Monday.

Meanwhile, the second session of the 21st Synod of the Diocese of Niger Delta Anglican Communion will kick off tomorrow at the St Michael’s Anglican Church, Buguma in Asari-Toru Local Government Area.

The theme of this year’s Synod, “Go and Make Disciples,” is expected to be declared open by the state governor, Rt Hon Chibuike Amaechi, and would last four days.

A statement by the Diocesan Communicator, Sir Olu Fubara said the  Bishop of the Diocese of Niger Delta, Rt Rev Ralph Ebirien was expected, among other activities lined up to present the presidential address and Bishop’s charge and preside over the launching of the synod report.

The Synod will be rounded off on Sunday with a thanksgiving service at the St Michael’s Anglican Church , Buguma, and a sermon by the Bishop of Ohaji-Egbema Diocese, Rt Rev Chidi Okparajiaku.

The Synod is a forum where the Diocese review its activities in the past, present and future. 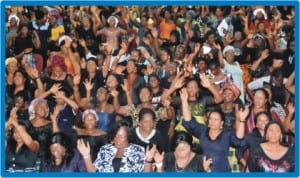