The Chairman, Rivers Caucus in the House of Representatives, Hon Honourable Osita, has vowed that majority of members of the Peoples Democratic Party (PDP) in Rivers State would not recognise the new executive of the party which a High Court in Abuja has caused to be inaugurated

Hon Osita, who represents Ahoada West and Ogba/ Egbema/ Ndoni Local Government Areas of Rivers State, said majority of members of the party in the state were not happy with the Abuja High Court judgement.

The lawmaker, who was speaking on  Focus Nigeria programme on AIT yesterday said the Abuja court failed in many parameters while delivering her judgement, adding that the controversial judgement last Monday had caused division among the party members.

Hon Osita who was in company of the state Vice chairman, ALGON, Mr Oji Ngofa, said the Godspower Ake-led state PDP  executive will appeal the judgement.

He believed that the court aired in many ways, especially, when it refused to address a motion of forgery before it, or examine a video clip of the state PDP congress as evidence, but went ahead to give judgement on the matter, based on affidavits tendered in court.

According to him, the National Working Committee of the party went ahead to inaugurate a team whereas only the Chairman, Mr Felix Obuah’s name was in the suit.

“How would the party inaugurate other persons when they were not part of the suit. It is only Felix Obuah who contested, now they have sworn in a team which were not included in the suit”,he said.

He noted that he and other members of the Peoples Democratic Party (PDP) would not recognise the new executive led by Felix Obuah because, he was not voted for at the last state congress.

Also speaking, said the action of the court posed serious moral questions, adding that the leadership of PDP  at the National level needed to address the moral burden thrown up by the ugly development.

He asked how the youth who participated in the election of Ake received the inauguration of an executive they did not  elect at the party state congress.

Apart from Honourable Osita, traditional rulers in the state, Association of Local Government of Nigeria(ALGON) and the state Government had all said they would not recognise the new executive of the party in the state.

It would be recalled that, a High Court in Abuja, the nation’s capital on Monday ruled in favour of Felix Obuah, who dragged Chief Godspower Ake to court.

It was also learnt that the Obuah along with 23 others were last Tuesday in Abuja sworn in as the recognised executive by the national executive of the party.

Meanwhile, Arising from the recent Abuja High Court judgement that sacked the Chief G.U Ake led Peoples Democratic Party (PDP) in Rivers State, the Association of Local Government of Nigeria of Nigeria (ALGON) Rivers State Chapter, says it will not recognise the newly inaugurated Executive of the PDP in the State.

ALGON stated this Wednesday during a press briefing addressed by the mayor of Port Harcourt, Hon. Chimbiko Akarolo with 16 council chairmen in attendance.

Hon. Akarolo said: “as the third tier of government and leaders of our great party in the council areas, we shall not accept or condone any illegal executive council to be foisted upon us.

He described the decision of an Abuja High Court as unfortunate and “bad luck” to democracy in country, stressing that they took part and voted for the Chief Godspower Ake led executive council of the party in the State and would not do any business with any other except one duly elected by  the accredited by the accredited delegates.

The chairman said after a thorough analysis of recent political developments concerning the sustenance of democracy in the state resolved that there exist a calculated plan by a group of individuals to cause breakdown of law and order in Rivers State.

the elected council chairman further argued that the climax of the plot was executed by the sack of the duly elected PDP State Executive council and the illegal swearing in of a group that never contested election as the new executive members, relying on an Abuja High Court Judgment on whether they would leave the PDP the chairmen said they would not abandon their house for the sake of an intruder and denied engaging in anti party activities since an earlier court judgment on the matter has not been vacated.

We declare our unflinching support for Governor Amaechi and the Chief G.U. Ake led executive council while appealing to their supports to remain calm and law-abiding as the judgment is being contested at the High Court of Appeal. 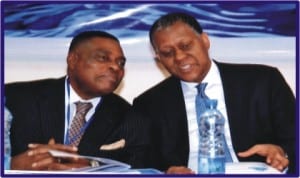