The Rivers State Government said yesterday that the removal of the Chief Godspower Ake-led Peoples Democratic Party (PDP) executives in the state was a travesty of justice.

The Commissioner for Information and Communications, Mrs Ibim Semenitari, however, told newsmen in Port Harcourt that an Okehi High Court had ruled that the Ake-led executive was substantive.

Okehi is the headquarters of Etche Local Government Area in Rivers State.

She said the Okehi judgment was not vacated before the Abuja court delivered another judgment removing the party executive in the state.

‘’The first thing I heard is that there is a new chairman and secretary of the PDP in Rivers State.

“I believe that there is a lot of error in that. I believe that it is a travesty of justice. I think that this is a kangaroo judgment. It is amazing that a judge will agree that a process is statute barred and still go ahead to deliver judgment.’’

The commissioner described as embarrassing, the inauguration of Chief Felix Obuah-led executive by the National Working Committee of the PDP.

“ I was a bit disappointed to imagine that a party that is going around preaching reconciliation would have two existing court judgments and go for one of them.

‘’ I do believe that there is a judgment by an Okehi High Court that does say that Chief Ake is the state chairman of the PDP. That judgment was subsisting and a judgment from a court of similar jurisdiction as the Abuja High Court was also given on the same matter.

‘’ It is a judgment that was obtained in a court that is actually within the jurisdiction of where this election held.’’

Semenitari said the Ake-led executive had filed an appeal and a stay of execution of the Abuja High Court judgment.

The Commissioner said it was indeed unbelievable that Mr Dan Orbih, Edo State  PDP Chairman, who conducted the election that brought in Ake executive, could say that he did not do it.

‘’ We remain members of the PDP. We remain committed and loyal party men. Governor Amaechi has said this without fail. You do not leave your house because a thief broke into your house. You cannot abandon your place of residence to a rogue; you will stay in your house and challenge the thief. So, I do not see that Governor Amaechi would leave the PDP, where he is not only a loyal party person, but a forefront member of that party.

‘’ He has not said so and I do not think that there is any chance of him doing so,’’ Semenitari said. 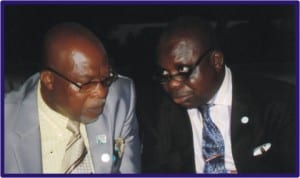