Rivers State Microfinance Agency (RIMA), has recovered over 80 per cent of disbursed loans from beneficiaries of its Rural Financial  Institution (RFIS) loan scheme targeted at cooperatives in about 21 local government areas.

Following this success, it has disclosed plans to disburse more loans to about 1,120 beneficiaries in Port Harcourt and Obio/Akpor Local Government Areas exempted  from the initial phase of the scheme.

Acting Deputy General Managing of RIMA and Head of Operations, Mr Nuirah Gbarayoks gave the hint during a chat with newsmen after the agency commenced a pilot scheme in Obio/Akpor at the weekend.

Mr Gbarayoks disclosed that within a space of two years, the agency has been able to recover about N130million from beneficiaries, while an outstanding of more than N30 million is yet to be collected.

“For us , this is success because in the history of microfinance leading in Nigeria nobody has made such recovery,” Gbarayoks said, “ the outstanding thing about this development is that despite the flood that affected three local government areas”.

He revealed that currently, the agency was battling to address the huge requests and application, with about 50 pending cases, hence the plan to review the scheme to cover more areas and increase membership of cooperatives to 15.

‘The plan is to increase the loan from N714,000 per RFI to about N1million”, he noted , ‘ and I think we are better positioned now based on our experience and result”.

Meanwhile, as part of its pilot scheme in Port Harcourt and Obio/Akpor Local Government Area, RIMA is to issue loans to about 40 identified  Rivers State indigenes in each of the local government area.

Mr Gbarayoks stated that because of the metropolitan nature of the two areas, targeted cooperatives have been increased to about 40 with 14 members each, “we want to cover as many as possible”, he added.

Already, loans have been disbursed to Rumueprikom Blossom Traders Cooperatives Investment as part of the exercise in Obio/Akpor Local Government Area.

A cheque of N1.4million was given to the  cooperative society at the weekend by RIMA officials, as they urged the group to ensure repayment by strengthening their business and investments.

President of the Rumueprikom Blossom Traders Cooperative, Mrs Vivian Owapim thanked RIMA for the loan, and assured that the money will be disbursed and utilized as expected of them.

On her part, the Secretary of the group, Grace Remi, a traders in  hair products, thanked RIMA and urged other cooperative groups to utilize the opportunity to expand their business. “This is the first time  I am seeing loans gotten without collateral, she remarked. 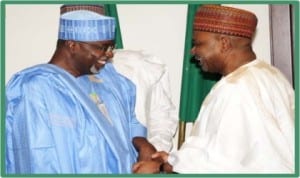 No Plan To Dump PDP …Explains Purchase of Aircraft –Amaechi