Furthermore, President Jonathan asked Buhari to emulate the role he ( Jonathan) played by visiting the  militants in their vast hideouts in the Niger Delta to plead with them to lay down their arms and accept the general amnesty granted by the late President Umaru Musa Yar’Adua on June 25, 2009.

The President said he expected Buhari to lead the way in persuading the Boko Haram insurgents in the North to stop bombings and enter into dialogue with the Federal Government with a view to ending the violence in the region, which is threatening to disrupt the economy of the region and Nigeria.

Jonathan, who sent the message to Buhari through his Senior Special Assistant on Public Affairs, Dr. Doyin Okupe, accused the former Head of State of making false allegations against him during his interview in London last week.

During the interview with the BBC, Buhari had said that the Federal Government should be held responsible for the worsening state of insecurity in Nigeria, accusing the leadership of not taking steps to halt the slide, which has claimed many lives and property in the region.

Buhari said: “The problem of terrorism is not confined to the North alone. Insecurity generally should be blamed on the Federal Government.

“The world is very much concerned about two things — the issue of security and economic wellbeing of a nation. Security is number one. A nation can only be economically viable if there is security. But how did all these crises start? How did the crises begin and assume this dimension?

“Until now, everyday, they abduct people and receive ransoms. How was the problem reduced? How did it start? What method was employed to convince them to mellow down?

“Similarly, what we should look at is, how did the Boko Haram start? We know all these. Security is the responsibility of the government.

“It is the responsibility of the Federal Government to know how this thing started and how to go about it.”

But Okupe asked Nigerians to demand from Buhari what he had done as a leader in the North and a former Head of State to halt the attacks by the sect.

He said: “Nigerians should ask him (Buhari) that as a former Head of State and as someone who wants to be president again, what he has done to end this insurgence in the country.

“Everybody knows that it was General Buhari, who vowed to make Nigeria ungovernable for President Jonathan if he loses the last presidential election. It was in Minna, that he said that once votes are countered and he loses that people should go for blood. He said in Hausa language. General Buhari is the person who sowed the wind that the nation is now reaping in whirlwind.

“He is not in any position to apportion blames on the issue of violence in the North or in Nigeria in general. He is a protagonist of violence. The only position he sees for not being the President is to call for violence. This government has tried as much as possible to contain some of Buhari’s unguarded statements. I don’t think anybody in Nigeria will take Buhari very serious when he makes such comments.

“If there is anybody to blame, General Buhari comes number one on that list. Have you ever seen General Buhari visit Borno State or condemn the acts of the Boko Haram or condole whether Christians or Muslims that have been killed?

“A man who can traverse the whole length and breadth of Nigeria, yet he cannot use that clout that he has and get leaders together to put an end to the insurgence in the country. And yet he finds it comfortable to blame other people. What has he done as a former Head of State to help Nigeria and Nigerians stop the militancy in the North or in other parts of the country?” 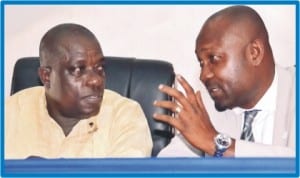