John Obuh has promised to overhaul Nigeria’s team ahead of the upcoming FIFA Under-20 World Cup following their inability to defend the Africa Youth Championship title.

The Flying Eagles beat Mali 2-1 last weekend to clinch third place at the just-concluded Championship in Algeria, having gone into the competition as champions but getting knocked out in the semi-finals by the Young Pharoahs’ of Egypt, who went on to beat Ghana in the final.

Obuh says there is room to bring fresh legs into the team as he is not going to build his team for the World Cup solely around the players he took to the Championship.

The former coach of Sharks FC disclosed that an average of between eight to ten additional players are going to be called-up to the team’s European tour which will be part of the preparation for the FIFA Under-20 World Cup.

There are also reports in Nigeria football circles that the Nigeria Football Federation, NFF is keen to ensure Imoh Ezekiel is drafted into the Under-20 team. The 19-year-old Standard Liege man has been one of Nigeria’s best strikers in Europe this season having scored 14 goals in 22 games.

Having made it to the semi-final of the AYC, Nigeria, along with Mali, Ghana and Egypt, have automatically made it the U-20 World Cup, were they have been placed in Groups B, D, A and E respectively.

Nigeria had been drawn in Group B alongside Cuba, Korea Republic and Portugal. The FIFA U-20 World Cup will take place between 21 June and 13 July in seven Turkish cities. 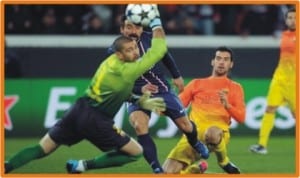 Barca’s keeper, Victor Valdes (left) watches as PSG ball gets beyond him, yesterday