The Joint Task Force (JTF) in the Niger Delta, Operation Pulo Shield, has arrested a sea going vessel with 12 crew members along the Akassa Waterways in Bayelsa State.

In a statement in Yenagoa, last Saturday, Media Coordinator of Operation Pulo Shield, Lt. Col. Onyema Nwachukwu, said the vessel was arrested during its anti-oil theft and pipeline vandalism operations.

Nwachukwu said that the operation took place between March 19 and March 29.

He said that the arrested vessel, MV Buyus with fake clearance documents, was secured at the Nigerian Navy Dock Yard in Brass Local Government of Bayelsa.

The suspects, according to the statement have been handed over to the appropriate prosecuting agencies for further investigation and subsequent prosecution.

It added that a fishing trawler christened Bolajoko with five crew members on board was also impounded by troops of the JTF at the NPA Jetty, Bonny in Rivers.

It said that the fishing trawler was impounded, while trans-loading suspected stolen crude into large plastic tanks and drums with the aid of water pumping machines.

The statement said that the suspects were currently undergoing preliminary investigations at the JTF Sector 2 Headquarters in Port Harcourt.

“During the operation, five camps, where stolen crude oil was being refined illegally, were discovered and destroyed in Akassa, Sangana, Igbematoru and Ogbia creeks of Bayelsa.

“They were seized along Elume in Warri North, Escravos , Saghara Creeks in Warri South and Benneth Island in Delta,” Nwachukwu said.

The drivers and tanker trucks were arrested when they failed to produce documents certifying them for lifting of the product.

They have been handed over to the Imo Command of Nigeria Security and Civil Defence Corps (NSCDC) for prosecution.

The JTF, however, urged oil firms operating in the Niger Delta region to collaborate and evacuate the reservoirs used by the oil thieves to deter the oil thieves from returning to the illicit trade.

“This call was necessitated, following the finding that most of the illegal oil refinery camps discovered during the operation had earlier been scuttled by JTF troops.

“But were later resuscitated as the reservoirs were not evacuated from the crime scene,” it said.

Our correspondent  recalls that Shell Petroleum Development Company had threatened to shut its Nembe Trunk line because of rising incidents of oil theft through its pipeline network in Bayelsa.

The Managing Director of SPDC, Mr Mutiu Sumonu, on March 4, urged the JTF to step up its activities to reduce oil theft, currently standing at about 60,000 barrels daily.

PENGASSAN’s President, Mr Babatunde Ogun,  made this known at a joint forum with the Nigeria Union of Petroleum and Natural Gas Workers (NUPENG) in Lagos yesterday.

He said that Nigeria also lost N105 billion to theft of refined products.

He blamed the incessant loss of billions of money on vandalism of crude oil and petroleum products’ pipeline.

He express regrets that security forces had been unable to arrest the unwholesome practise which led to fire disaster in Arepo and Ogun and the subsequent shut down of Nembe Creek Trunk line by Shell.

He said it was sad that no one had ever been caught or prosecuted even when the miscellaneous offence Act provides for life imprisonment for anyone who stole crude oil, petroleum product or vandalised pipelines.

He advised government to beef-up security and warned that the oil and gas sector would suspend production of crude oil and supply of petroleum products if nothing was done.

Ogun called on government to deal with the insecurity problem in view of the resurgence of kidnapping and continuous bombings. 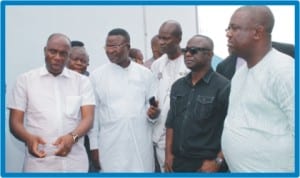