The Presidency yesterday said it had no plans to remove the subsidy on petroleum products.

Presidential spokesman, Dr. Doyin Okupe, in a statement in Abuja, said despite President Goodluck Jonathan’s recent remarks concerning subsidy removal, the administration, as a matter of policy, had no plans in that direction.

Besides, Okupe, who said the President was mindful of the reactions and plight of the Nigerian people, maintained that sufficient allocation for fuel subsidy had already been made in the 2013 budget.

He added, “therefore, there is no cause for alarm on removal of fuel subsidy.”

Speaking on Jonathan’s remark at the Economic Summit in Lagos State recently, Okupe said:, “this was a frank, intellectual and well-articulated contribution by the president to the discussion on the Nigerian economy at the said summit, and it was from a honest and sincere leadership perspective.

“The president and this administration are not insensitive to the plights of the Nigerian masses and will continue to pursue and execute policies and programmes that are in the overall interest of majority of Nigerians, and that will bring the greatest good to the greatest number of our teeming population.

“Finally, for the avoidance of doubt and at the risk of being repetitive, this administration is not considering the issue of removal of fuel subsidy in the nearest future and certainly will not embark on any such programme without extensive consultations and engagements across the various segments, interests and stakeholders in the Nigerian polity,” he said. 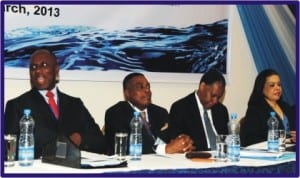