About 2,794 water facilities designed to boost access to potable water supply have been identified across  the state.

A breakdown of this figure shows that, 1,015 of the water scheme are functional, while 1,776 are non-functional.

Governor Amaechi, who inaugurated the committee during the Rivers State Water Sector Development Conference  in Port Harcourt, last Wednesday said that the policies of the state government in the water sector had been acknowledged by the  World Bank and African Development Bank (AfDB).

The governor also charged the  African Development Bank to hasten the process of releasing its counterpart funding to enable the water project take off.

In her welcome address, the Rivers State Commissioner for Water Resources and Rural Development, Ms Patricia Simon-Hart said the government had decided to reform the water sector to ensure sound water governance and strengthen the institutions to deliver services effectively. 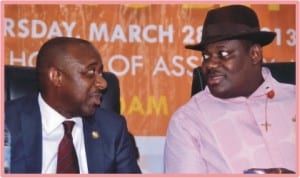