The Rivers State Government, says it has closed down some orphanages in the state following their involvement in child trafficking and other anti-social activities.

The state Commissioner for Social Welfare and Rehabilitation, Mr Joe Poroma, who said this during the commissioning of Brown’s Orphange at Eagle Island, Port Harcourt,yesterday also said that some orphanages  been turned into child producing factories and brothels.

Hon Poroma, who represented Governor Chibuike Amaechi at the occasion, cited the case of an orphanage in Etche Local Government Areas that had become a big trafficking home.

He expressed delight with the chairman of the Susan Brown Foundation, Ms Kadilo Brown, who is also the Permanent Secretary, Ministry of Chieftaincy Affairs for the courage to undertake such a project, and restated the readiness of the Ministry of Social Development and Rehabilitation to partner her on the project.

The Senator representing  Rivers South-East Senatorial Zone in the National Assembly, Senator Magnus Abe in his keynote address, described the project as a noble one that is worth encouraging.

Senator Abe, who was the  guest of honour at the occasion, pledged to support the foundation with 10 per cent of his salary.

The chairman of the occasion, Sir Ngo Martyns-Yellowe described  the project as a huge challenge to the foundation as the inmates had to be fed, clothed and educated.

Sir Martyns-Yellowe, who is the chairman of the Rivers State Civil Service Commission, said that the situation had underscored the need for members of the society to show interest in the Brown’s orphanage.

Earlier in her welcome address, chairman of the Susan Brown Foundation, Ms Kadilo Brown described the home as a product of divine call.

Ms Brown, said that the  home would give hope and succour to the less privileged children in the society and expressed optimism that the orphanage would, through public support meet international standard. 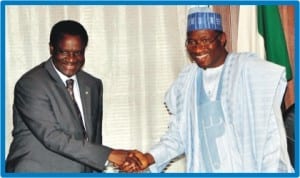