The police yesterday confirmed that 25 persons were killed during an attack on Ganye Town, the headquarters of Ganye Local Government Area in Adamawa State by gunmen last Friday.

The Nigerian Prison Service also confirmed the killing of the Deputy Comptroller in charge of Ganye Prison, Malam Baba Musa, and the release of 127 prison inmates.

The Public Relations Officer of the Police in Adamawa, DSP. Mohammed Ibrahim, told newsmen yesterday in Yola that among those killed by the gunmen was a policeman.

Ibrahim said that the police could not contain the rampaging gunmen because they were armed with sophisticated weapons.

The Prison Comptroller in the state, Mr Andrew Barka, said the 127 prisoners released by the gunmen escaped during the attack, corroborating the killing of the deputy comptroller.

“We lost a deputy comptroller, Baba Musa, in the attack and some parts of the prison were also destroyed.’’

Ibrahim said that none of the 127 inmates that escaped had been re-arrested.

“We lost a deputy comptroller in charge of the Ganye prison in the attack. He was shot dead by the gunmen,”

He said that the prison gate was torn down and the cells were forced open by the gunmen, allowing the prisoners to escape.

The gunmen killed 25 people in series of attacks on different locations on Friday in Ganye, including the prison, a police station, a bank and two taverns, state police spokesman Mohammed Ibrahim said.

“The gunmen used bombs, machine guns and rocket-propelled grenades in the attack on the prison, the police station, the bank and some beer parlours,” Ibrahim said.

Officials said they do not know how much money the gunmen took from the bank.

Although Ibrahim declined to say if the attackers were members of the Islamist Boko Haram sect, the raids resembled previous ones claimed by the group in parts of the north.

Criminal gangs are also known to have carried out similar attacks.

Violence linked to Boko Haram’s insurgency in northern and central Nigeria, including killings by security forces, has left some 3,000 people dead since 2009.

Our correspondent  recalls that the gunmen attacked Ganye, a border town at about 6 p.m. on Friday, in an operation that lasted more than two hours.

He said seven people were shot dead in the tavern, six near the bank, while others were gunned down either outside their homes or on the streets.

It was not immediately known how much money the gunmen took from the bank.

“The gunmen used bombs, machine guns and rocket-propelled grenades in the attack on the prison, the police station, the bank and some beer parlours,” Ibrahim said.

Troops and policemen deployed to the troubled town recovered three unexploded bombs, a Kalashnikov rifle and some rounds of ammunition left by the attackers, the police chief said.

No arrests have been made following the attacks, he said.

Although he declined to say if the attackers were members of the Islamist Boko Harm sect, the raids resembled previous ones claimed by the sect in parts of the north. 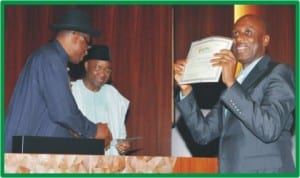