The breakdown shows that Ondo State came first with 91 per cent, Cross River came second with 83 per cent and Kogi, third with 81 per cent.

Anambra came fourth with 76 per cent, Borno was fifth with 72 per cent and Zamfara came sixth with 60 per cent.

Niger state was identified as the most improved state in the campaign for the eradication of polio in Nigeria.

Briefing newsmen at the end of the NGF meeting, which ended in the early hours of Thursday in Abuja, Dr. Shehu Sule, a member of the panel of judges, said each of the states won in the six geopolitical zones of the country.

Sule said the emergence of the winners followed the evaluation of performance data by the panel of judges from the health sector.

The challenge, which is geared towards eradicating polio from Nigeria is sponsored by the Bill and Melinda Gates Foundation and also supported by the National Primary Health Care Development Agency and the Ministry of Health.

Sule, a retired Permanent Secretary in the Federal Ministry of Health, said each of the states could be rewarded with as much as $1 million to boost immunization against childhood killer diseases.

“So in the end, they will have about $1 million to support MDGs programmes and immunization.” 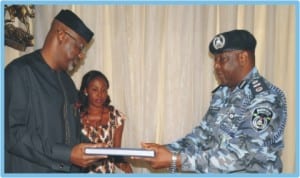