The Rivers State Government has reassured its commitment to complete all major road projects under construction in the state within the 2nd quarter of this year.

Commissioner for Works, Chief Victor Giadom, who disclosed this in an exclusive interview with The Tide last Tuesday in his office in Port Harcourt said the step was aimed at making the best advantage out of the dry season.

Giadom said contractors handling various road projects in the state had been fully mobilised to go back to site and ensure speedy work on the projects.

The commissioner disclosed that some of the roads were already within their last stages of completion and would be delivered for use soon.

He explained that full mobilisation of contractors was made possible by the recently acquired loan, which was approved by the Rivers State House of Assembly.

Giadom further pointed out that the loan had made it easier for the Rivers State Government to mobilise contractors handling various projects in line with the Governor Chibuike Amaechi’s promise to deliver all projects embarked upon by his administration.

Apart from the three roads, which would be delivered for use in the next six weeks, the commissioner said his ministry had also intensified monitoring of the activities of contractors handling other road projects, when he said had no excuse for delay in execution of the projects following their full mobilisation.

He expressed satisfaction over the level of work done on the Peter Odili-Akpajo link road being handled by JDP Construction, noting that when the road was completed, it would ease the traffic congestion on that route.

On the Iwofe Road, the commissioner explained that the delay in the commencement of construction work was because property owners along the road had not been compensated.

He said his ministry was waiting for approval for the compensation, which was undergoing due process scrutiny and assured that work would commence speedily on the project as soon as payment of compensation to property owners was effected.

Explaining the seeming delay on the St. John-Ogbogoro Road compared to Ada-George-Elioparanwo Road, the commissioner attributed the delay to capacity of the various contractors.

He said his ministry was taking steps to review the St. John-Ogborogoro Road project to ensure that the work was done according to specification.

Commenting on Ilabuchi-Eagles Island link road, the commissioner said contrary to speculations making the rounds over the seemingly dormant state of the project, it was still part of on-going projects.

He said the initial contractor was cancelled and the project awarded to Lubrik Construction Company which he said had been mobilised to go to site, adding that the road was expected to be ready for use within the next seven months.

On the Elelenwo-Akpajo Link Road being handled by Rafoe Nigeria Limited, the commissioner said remarkable work had been done on the project, stressing that the project was expected to be ready in 2014. 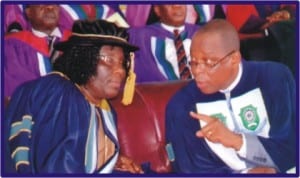