Of all the statements of their footballing greatness, and that of the unreal Lionel Messi, perhaps this was Barcelona’s most emphatic in the modern era. The night that they delivered one of the great European comebacks to dispose of AC Milan and silence their naysayers.

No side had ever prevailed after being 2-0 down following the first leg of a Champions League knockout tie but, even in the absence of their manager and after their most stuttering spell of performances for five years, Barcelona rediscovered all their old trigonometric élan to hypnotise and then slice through Milan.

What a night for the 96,000 Barcelona faithful. They had been scolded by Gerard Piqué to make thunderous noise or stay at home and they responded with a gale-force din as two goals from the wondrous, unplayable Messi, another from the forgotten Nou Camp force David Villa and a fourth, fittingly from a rampaging full-back Jordi Alba, saw them avoid the indiginity of being bundled out of the competition before the semi-final stage for the first time in six years.

The end of an era? What a laugh. This was Barca at their matchless finest and a wonderful tonic for both manager Tito Vilanova, as he battles against cancer in a New York clinic, and his beleagured stand-in Jordi Roura.

Just as Jose Mourinho had billed last week’s United-Real clash, this again had all the feel of a game that the world stops to watch as the faithful, stung by Piqué’s call to arms, poured into the old cathedral urgently looking for a reprise of some of the fabulous recent European nights here and unfurling cards to spell out the message in Catalan “Som Un Equip!”  “We are a team!”

A team, though, with one added dimension. For at the heart of those most sublime of knockout stage demonstrations, like the 4-0 demolition of Bayern Munich four years ago, the 4-1 crushing of Arsenal in 2010 and the 7-1 annihilation of Bayer Leverkusen last March, there was one common factor at work; the true flowering of Messi’s genius as he scored 11 goals in those three matches.

Yet in the first leg defeat at the San Siro, the world’s finest had looked more anonymous and lifeless than anyone could recall.

With Xavi back after his hamstring injury and Vilanova, choosing the team from New York, having also put his faith in Villa to find his scoring touch after netting just two goals since the start of November, what was really needed was for the little Argentine to deliver his Champions League best.

How he delivered. Within five minutes, after the most intricate of passing build-ups, Messi and Xavi, dealing in the sort of telepathy the game has rarely seen, somehow managed from Sergio Basquets’s rifled diagonal pass to contrive an extraordinary one-two on the edge of the ‘D’ which ended with Messi curling the ball into the top corner.

It was astounding. It felt almost impossible. Messi had been surrounded by six white shirts, all within about two yards of him, yet still the great conductor Xavi managed to instantly feed the predator who took one touch then instantly buried his 52nd goal of the season.

The roar would have shaken the towers of the Sagrada Familia. This was the signal for the old Barcelona to re-emerge, swaggering in attack, devilish in attempting to immediately recover the ball when they lost it  which was not very often  and Messi at the heart of everything.

Milan seemed utterly fazed. Concentration levels dipped and the ball was several times given away absent-mindedly under pressure as Xavi’s demand for more pace, width and direct intent in Barcelona’s attacks was thrillingly realised.

They should have been awarded a penalty after Ignazio Abate fouled Pedro but no matter. 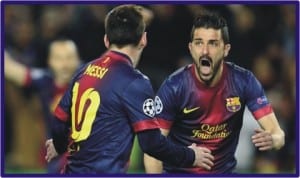 UK, Others Condemn Killing Of Hostages In Nigeria