President Goodluck Jonathan, visiting Yobe and Borno states, the heart of the Boko Haram insurgency, for the first time since he was elected in 2011, has rebuffed calls for an amnesty deal for the Islamist extremists.

Jonathan’s remarks yesterday, comes on the heels of mounting political pressure for him to travel to the region and follow calls this week from top Islamic leader, the Sultan of Sokoto, Abubakar Said 111, that the Federal Government should grant amnesty deal for the insurgents.

Jonathan landed in Maiduguri, the capital of Borno State, considered the home base of Boko Haram, and travelled by helicopter to neighbouring Yobe State, also hit by repeated attacks blamed on the terrorist group.

Security was tight, with more than 40,000 security operatives, led by the Inspector-General of Police, Mohammed Abubakar, and soldiers stationed along roads and movement restricted. Jonathan is on a two-day visit to both states, and would return to Abuja from Maiduguri, today.

Jonathan said in Damaturu, the capital of Yobe State, that he will not rule out an amnesty deal in the future, but said that it was impossible to negotiate an agreement with Boko Haram because their identities and demands remained unclear.

“You cannot declare amnesty for ghosts,” Jonathan told an audience of thousands of politicians and dignitaries in the Yobe State capital, Damaturu, broadcast live on national network television.

Jonathan made reference to a 2009 amnesty deal for militants in the oil-producing Niger Delta region, saying that the deal has been credited with greatly reducing unrest in the Niger Delta, but criminality has continued, including the brazen theft of crude oil, which has denied the Federal Government an estimated $7billion per annum.

“In the Niger Delta, if you call them, they come and they will tell you their grievances,” Jonathan said, adding that, “but Boko Haram , I don’t see anybody who says they are Boko Haram.”

The visit came with Jonathan facing political pressure to visit the northeast, wracked by scores of bombings and shootings blamed on Boko Haram.

However, the Joint Military Task Force has been accused of major abuses in response to the insurgency.

It is also the region where seven members of a French family were believed to have been taken after being kidnapped on February 19 just over the border in Cameroon.

The family remains held by their abductors, and their whereabouts are still unknown.

There have been growing calls for Jonathan to visit the area for months.Jonathan earlier in the day, held talks with Yobe State Governor, Ibrahim Geidam, and commissioned a number of projects embarked upon by the state government.

Violence linked to Boko Haram’s insurgency in northern and central Nigeria has left some 3,000 people, mostly Christians and southerners, dead since 2009.

The group has claimed to be fighting for an Islamic state in Nigeria, Africa’s most populous nation and largest oil producer, though its demands have repeatedly shifted.

It is believed to include various factions with differing aims, in addition to imitators and criminal gangs, who carry out violence under the guise of the group.

Jonathan, a southern Christian, has been accused by his opponents of neglecting the northeast.

Meanwhile, the Christian Association of Nigeria (CAN) has rejected suggestion by the Sultan of Sokoto, Alhaji Muhammad Sa’ad Abubakar III, that members of the Boko Haram sect be offered amnesty.

This is contained in a statement issued and signed in Abuja by the CAN General Secretary, Dr Musa Asake.

The association said that it wondered the kind of amnesty proposed by the monarch and advised the Federal Government to reject such suggestion.

It, however, welcomed the idea of a stakeholders’ meeting to genuinely discuss the issues that concern the development of the country.

“We wonder the kind of amnesty contemplated by the Sultan, this is why we are puzzled.

“We therefore say categorically that we reject any offer of amnesty for members of the Boko Haram sect.

“We ask government to do same. One group of people cannot continue to pay the price for one Nigeria. We must sit together as brothers and discuss issues,’’ the statement added.

It stated that the reasons given by the Sultan for the offer of amnesty was not tenable and should not be accepted.

The association argued that the sect had not clearly stated its grievance with government or other elements of the state and hence was not qualified to be offered amnesty.

“We wonder what the Sultan meant by injustice in relation to the activities of the Boko Haram sect when members of the group are a bunch of fundamentalists who have killed, maimed, deformed Christians”, the statement read.

It said that for the talk about amnesty to hold water, the Islamic militant group must first of all renounce their extreme ideology and embrace the cease fire plan.

CAN added that President Goodluck Jonathan should first of all give the sect members a deadline within which they should organise a cease fire before any talk about amnesty would be considered.

Our correspondent recalls that the Sultan of Sokoto had called on government to offer total amnesty to members of the sect as part of the search for peace and security in the north. 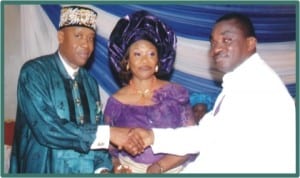 L-R: Rear Admiral T.G Sam Epelle, his wife,Amaka and Tony Epelle, presenting an award on behalf of the Opobo Progressive Association, Lagos to the newly promoted Rear Admiral, at a reception organised for him in Port Harcourt, recently