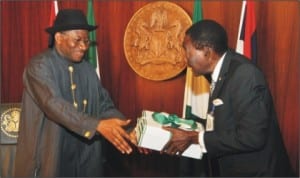 The Ogbakor Ikwerre Cultural Organisation has  commended the sterling leadership and enormous achievements of Rivers State Governor, Rt Hon Chibuike Amaechi even as the Rivers State caucus in the House of Representatives has expressed satisfaction with the level of projects implementation in the state by Governor Amaechi.

Both groups made their commendations during separate solidarity visits to the Rivers State Governor  last Monday at Government House, Port Harcourt.

Speaking on behalf of the Ogbakor Ikwerre Cultural Organisation, its President-General, Prof Augustine Onyeozu said, “the former national executive led by Chief S. A. Agbaru briefed the convention fully on your audible, laudable programmes and landmark achievements as Governor of Rivers State since you assumed office.  The incontrovertible fact is that your performance and achievements are superlative and excellent.  You have brought pride and honour to us.  We are indeed very proud of you.  We will further urge you to ensure that in all your conduct and activities in government, you give every ethnic group in this state adequate and appropriate sense of belonging”.

The Ogbakor Ikwerre equally thanked the people of Rivers State for their continued support and loyalty to Governor Amaechi.

“The people of Ikwerre ethnic nationality with every sense of responsibility appreciate all the ethnic groups in Rivers State for the support and loyalty they have given to His Excellency’s administration.  It is our fervent prayer that in due season, we shall reciprocate this love the Rivers people have shown to you, our son and to us”.

The group however urged Governor Amaechi to disregard negative comments coming from people who unjustly misinterpreted his government policies and remain focused, courageous and objective to deliver on his mandate. They also pledged their support and loyalty to him.

“His Excellency in recent times we have observed the misinterpretations being given to some of your executive actions. As your parents, we know you keep your words and that you mean what you say. In our clime unfortunately, not many appreciate being told the truth and very many prefer those who deceive them.  Remain focused, courageous and objective in all your undertakings.

“We want to assure His Excellency that the Ikwerre people will stand by you in any and all actions you may take to uphold the spirit and letters of the oath of office you swore to.  Deliver on your mandate.  Delivering on your mandate is non-negotiable.  We are proud to say to you today we are very proud of your scorecard as the executive Governor of Rivers State. We wish you continued success in office and God’s eternal blessing”, they said.

“Let me thank you for this visit and welcome you to the Government House of the Rivers State Government and say to you that this in Ikwerre tradition reminds me of a wrestling match.  When two groups are matched for a wrestling match, each leader of the group continues to use a cane to wipe on the back of the expert who is wrestling to ensure that he is motivated and does not allow the other man to bring him down.  I liken this visit to that”.

Amaechi said his administration has equitably distributed projects in the state and integrated all Rivers people in his government. He equally appealed to the people of Rivers State to love one another and work together in common pursuit for the state’s progress.

“We must work together as Rivers people.  We must love each other.  We must know that just as the rest of Rivers people have said an Ikwerre man must be governor, Ikwerre people must also participate in saying ‘another ethnic group should be governor’.  When it goes from there, it goes to somewhere else and somewhere else and somewhere else until it gets back to the Ikwerre people again.  We must not misuse our majority. We can use the majority to participate but we must not abuse the majority. I must thank you on behalf of cabinet for the unalloyed support you have promised.  Ikwerre people must be ready to be part of the progress of Rivers State by using their votes”, he said.

The Governor promised to construct more internal roads and complete all ongoing projects in the state.

Leader of the Rivers Representatives, Hon Asita O. Asita, the lawmaker representing Ahoada-West and Ogba/Egbema/Ndoni Federal Constituency spoke on behalf of other members of the caucus.

While expressing satisfaction with the level of projects implementation in the state, the Rivers Caucus congratulated Governor Amaechi for his courage in giving the state a face lift and speedy development.

“We are here to express and declare our support and appreciation to you, on how you have successfully and wonderfully managed the affairs of the state. In the past five years and four months, we are satisfied with the level of implementation and vision that you have shown, we are satisfied and indeed thankful to God for giving you to our state at such a time as this, and wish to congratulate you for the show of uncommon courage and statesmanship in the face of uncovered hostilities towards your person as governor”, Asita said.

On issues concerning the East-West road construction, Hon. Asita said, as primary beneficiaries of the road traversing the state and their different constituencies, the Rivers Caucus should be seen as stakeholders and interested parties in the execution of the project which should be taken seriously.

“At different times Your Excellency, notable personalities in this region have expressed fear and concern over the slow and unserious nature of the execution of the East-West road construction project, we are happy that you agree no less with us, and challenge detractors of the Niger Delta people who suffered so much loss on this road to show proof to the contrary, but we are still worried that the road is still very deplorable and nothing significant has been done before and after you made those harmless rather patriotic comments that attracted unnecessary political interpretations”, Asita said.

The Rivers Caucus further maintained that they will continue to deploy the instrumentality of the National Assembly to focus on East-West road construction project with the expectation that the road when completed will enhance the economy of the Niger Delta region.

The delegation equally urged Governor Amaechi to challenge the unwholesome attempt to cede Rivers territory to other states, and also thank him for taking steps to defend the territory that make up the different constituencies which he (Amaechi) declared to protect on assumption of office as Governor of Rivers State.

“We encourage you to be steadfast, especially at times like this, so that one does not go to bed a citizen of Rives State, and wake up the following morning, a citizen of another state, or have our land ceded because of oil, we join all other well-meaning indigenes of the state to say no resources should be spared in this pursuit”, Asita said.

On this part, Rivers State Governor, Rt. Hon. Chibuike Rotimi Amaechi thanked the show of support by the Rivers State Caucus in the House of Representatives, saying that he will continue to discharge his responsibilities and also defend the Rivers territory which has a geographical location in the country’s constitution.

“We must as a people work together, your responsibilities as Federal Lawmakers is to watch out for those issues that will tamper with our resources, so that you can speak out”, Amaechi said.