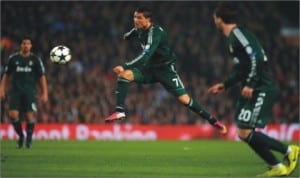 In his day job, the Turkish referee Cuneyt Cakir is an insurance agent so he will be well aware of the arbitrary, irrational mishaps that can blight the ordinary lives of everyday folk. He is supposed to be the man who offers mitigation against them, but tonight he turned into the force that wreaks the havoc.

A Champions League tie that was tight and intriguing, with Manchester United holding the advantage with a 2-1 lead on aggregate was turned on its head by a decision by Cakir that was just plain wrong. Just shy of the hour he sent off Nani for a high boot on Alvaro Arbeloa that might have merited a yellow card and United’s 10 men never recovered.

It was an extraordinary decision, one that Cakir seemed to build himself up to in the small timeframe in which he waved away United players who were trying to persuade him not to blame Nani. He might have heard something in his headset from his assistant on the near-side but whatever went through his mind, it was a disaster. Even Jose Mourinho conceded: “the best team lost.”

There is always a tendency for the beaten side to bleat about the referee but this time, as Ferguson jabbed a finger at the referee from the touchline, you had to ask yourself: why so incompetent? There has not been a worse refereeing performance in a Champions League tie since Tom Henning Ovrebo blundered his way through Chelsea’s 2009 semi-final against Barcelona.

Floored by the decision, United conceded goals to Luka Modric, a substitute and then Cristiano Ronaldo and bowed out. It had been a game that had promised so much for them.

If you were so inclined, you might have tried to explain the omission of Wayne Rooney as something that the player could regard as a positive thing, but, really, what big player accustomed to starting matches for his club could be happy with anything other than a place in the team?

It was a landmark moment in Rooney’s career. It was the first time he was dropped for a significant game, but perhaps not the last. It changed at a stroke the dynamic of his relationship with Ferguson, with this team and the club itself. But tonight was United against Madrid, and even this development in the life of a famous footballer was not going to overshadow the football.

Of the chances there were in the first half, and there were not many, the only really significant ones fell to United. Nemanja Vidic crashed a header against the post from a corner from Ryan Giggs on the right and when the ball came back it fell to Danny Welbeck whom flagged offside, snatched at his chance somewhat and hit it straight at Diego Lopez on the line.

Welbeck saw little of the ball, but when he did he looked a potent as any attacker on the pitch. Robin van Persie was also forced to survive on a mediocre level of service but he too made so much more of it. He got a good shot on goal after 34 minutes from the right side that Lopez blocked but could not hold and yet when the ball bounced out to Welbeck, the Madrid goalkeeper composed himself and blocked the shot. On an average Premier League Saturday afternoon, those kind of chances might have passed without comment but this was Real Madrid and the margins were always likely to be fine.

Ronaldo had been introduced to Old Trafford as the club’s once “magnificent No 7” and the response from the home fans briefly transcended the partisan desperation to prevail in this tie. It was a wholehearted outpouring of love and respect for a great player which Ronaldo duly acknowledged. Within a few seconds he got his first touch and was booed, but that was strictly ironic.

Ronaldo was quiet before the break as Madrid failed to get away on the counter-attack after a bright start. Before the end of the first half, they lost Angel di Maria to injury and he was replaced by Kaka. There were some wonderful moments from Giggs, another surprise selection in his 1,000th professional game. Two nifty tackles on Fabio Coentrao, the accomplished left-back, and a superb ball with the outside of his left-foot that set up a half-chance for van Persie, drew applause.

There was no denying that United looked comfortable and if there was a gameplan then it seemed to be working to perfection when, three minutes after half-time they took the lead. It was a goal that owed something to luck in that Varane lost Nani and it was Sergio Ramos turned the ball into his own goal, but even so, it was coming.

By then, Welbeck had the Madrid defence on the run and it was he who helped create the panic. The ball broke left to Nani who crossed it back and, via a slight contact with Welbeck, it was prodded into his own goal by Ramos who could not get his feet sorted out in time.

Even in the period of pressure enjoyed by Madrid that followed the goal, United had control of the game but then the Cakir intervened and the game was turned upon its head. Nani’s foot was high on Arbeloa when he made contact and Ramos was soon on the scene to protest to the referee. He was pushed away by Van Persie who, along with Giggs, both seemed to be making the point that Nani’s eyes had been on the ball when Cakir pulled a red card out his breast pocket. It was a stunning moment.

Ferguson went up to fury level 10 in record time. He could see what was coming. Within minutes, Rafael headed Higuain’s header off the line. Then on 67 minutes, Modric, a substitute brought on after the red card, stepped away from Carrick outside the area and clipped a shot that went in off the post.

United were on the rack, with Ferguson and then Giggs entreating the fans to make more noise. Two minutes later, Rafael lost Ronaldo and he slid in at the back post for the second goal from Higuain’s cross. With Rooney on, then Ashley Young and Antonio Valencia in the closing stages, United threw a lot at Madrid but Kaka still hit the post and two goals was always going to be a tall order.