Energy drinks have been described as a major contributor to the rising spate of deaths arising from kidney failures, liver infection and heart attacks, in the country.

Medical experts told The Tide in an exclusive interview in Port Harcourt, the Rivers State capital, recently, that the consequence of too much consumption of energy drinks was the sudden rise in blood pressure, kidney fairlure gradual destruction of the liver, heart attack or blindness.

“They also contain a large dose of glucose, which causes “system overdrive”.

According to Korubo, anything that can alter one’s physiological state is a drug, adding that overuse of any drug amounts to abuse and could lead to disastrous effects on the user.

“The consequence, in the short term, is the sudden rise in blood pressure, heart attack and sudden death”, stressing that the abuse of energy drinks “could lead to gradual destruction of the kidney, liver and heart as well as cause blindness.”

Korubo explained that when energy drinks were first introduced, “there were some caveats warning consumers ‘do not mix with alcohol, take one can in 12hours’ but what we observed is that the manufacturers have fraudulently removed those caveats or warning”.

The NMA chairman lamented that “the rate of energy drinks consumption among young persons in Nigeria is alarming, and it should be outrightly banned”, saying that if moderation is adviced, nobody will listen.

“It is common sight to see young people mixing energy drinks with alcoholic wines,” Korubo said, and warned that such habit “is simply suicidal”.

Patient medicine dealer in Port Harcourt, Dr Okechukwu Chukwuma said that those who consume caffeinated drinks risk over-stimulation of their hearts, which could in turn lead to hyper-activity of the heart and abnormal rate of heart enlargement and weakening of the cells.

Chukwuma said that the situation was even more serious for those who may already have heart conditions campy that such consumption could lead to death due to some electrical activity in the heart, resulting in cardiac arrhythmia.

He further noted that “caffeinated drinks are neuro-stimulants,” adding that “consumers are more likely to suffer from insomnia, anxiety and brain disorders.”

The Tide investigations reveal that while many consumers, who appreciate the negative effects of energy drinks on the human system, support their complete ban, other ignorant Nigerians and mostly dealers, lament that any attempt to ban the import of energy drinks would deny them a source of pleasure, new market opportunities and increasing profit in their businesses.

In an interview in Port Harcourt, a staff of one of the major oil and gas companies, who pleaded anonymity, said that any action banning the importation and sale of energy drinks could be seen as a declaration of war on a large segment of the population who feel that the only way to blur their minds off the failings of the system is to resort to the intake of the caffeinated brands.

On his part, a dealer in energy drinks, Chijioke Emenike, lamented that “already, all the negative publicities are cutting deep into our profit margins,” adding that “the outright ban of energy drinks would throw a lot of us out of business.”

However, while fielding questions from The Tide, the lawmaker representing Khana 1 Constituency in the Rivers State House of Assembly, Hon Legborsi Nwidadaah, applauded members of the House of Representatives for their move to stop the importation of energy/power drinks into Nigeria.

Nwidadaah said that members of the National Assembly had good reasons which is in the interest of the majority of Nigerians, to push for the ban on the importation of energy drinks.

According to him, “they must have seen something that is detrimental to our health. If they are representing the people, and they have seen that some of the drinks are substandard, hazardous and therefore injurious to our health, they are right as representatives of the people, to bring forth a motion and take a resolution banning the drinks.

“The ban should not end with energy drinks alone but should include other beverages and spirits that have been found to be substandard and or injurious to our health.”

While expressing reservations over an outright ban on all energy drinks, Nwidadaah said, “some of them are good and for these ones, the companies should be encouraged to come into the country to build their brewery plants and boost our economy.”

He argued that if the brewery plants are built in Nigeria, the raw materials used would be sourced locally, while indigenous capacity would be built over time through employment creation and development of in-country ancillary industries.

The Tide investigations show that 66 per cent of those who consume energy drinks are between the ages of 13 and 35.

Out of this number, The Tide discovered that some 65 per cent of them are males, who constantly take delight in the consumption of the power drinks to enhance their ability for fast stimulation.

It would be recalled that on January 22, 2013, the House of Representatives announced a motion to place a ban on the importation of energy drinks based on the findings of the House that some of the power drinks contained life-threatening substances that could adversely affect the brain, and blood pressure, and could lead to blood clotting complications.

Already, energy drinks have been banned in countries such as Norway, Denmark, Germany, and France due to their health implications and fatalities traceable to the intake of energy drinks. 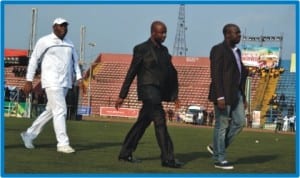 Judges Must Be Above Board – Amaechi