The Rivers State Government has begun moves to end the frequent overseas medical trips by Rivers people and Nigerians in general, and make the state hub of medical tourism in Africa.

To this end, the state government has equipped two hospitals, the Kelsey Harrison Hospital, and the Dental and Maxillo-Facial Specialist Hospital, all in Port Harcourt with world-class medical equipment and experts to handle critical matters.

Ibeanusi stated that ITCC will manage the two hospitals with its own foreign experts for a period of 20 years, during which it would train its local personnel to take over from the foreign experts.

He said while the Kelsey Harrison Hospital has taken off but with only out-patients, the Dental and Maxillo-Facial Hospital, located at Garrison Junction, along Aba-Port Harcourt Road will take-off fully before the end of February, 2013.

Ibeanusi expressed the hope that with the two hospitals open for service, most Nigerians will prefer to visit Rivers State, instead of traveling overseas for medical attention.

“With these hospitals fully open for service, Rivers State will become a tourism destination for Nigerians seeking medical attention. A lot of Nigerians will prefer coming to the state and will no longer like travelling overseas for medical treatment,” he stated.

Also speaking, the Permanent Secretary, Rivers State Ministry of Health, Dr. Godwin Mpi, said the idea behind the two hospitals was to make sure that the people of the state get quality medical attention at minimal cost.

Mpi disclosed that the Kelsey Harrison Hospital has two type of patients, which include private patients and those under the state government’s free medical programme, pointing out that those under the programme must have been referred to the hospital from other smaller health facilities in the state. 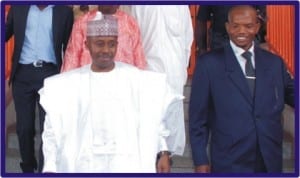 Former Chairman, House of Representatives Committee on Fuel Subsidy Regime, Rep. Farouk Lawan (left), coming out of the FCT High Court, which ordered that he be remanded in Kuje Prison till February 8 in Abuja, last Friday.