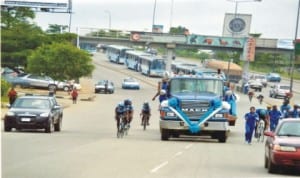 Governor Amaechi who made this declaration when he received the Torch of Unity in Port Harcourt on Friday for the 18th National Sports Festival stated that the state’s athletes have been going in and out of camp and that their welfare is being given adequate attention. Also, he said the state engaged most of the best coaches in Nigeria to achieve set objectives.

The governor who was represented by his deputy, Engr Tele Ikuru.

According to him, Rivers State holds the record of winning the biennial sports fiesta with the highest number of medals.

“Rivers State is the first among equals, we are not only going to participate, but participate to win’, Ikuru said.

It would be recalled that the state hosted the 17th edition of the NSF tagged “Garden City Games 2011” and won. Team Rivers won 135 gold, 79 silver and 85 bronze medals, bring the medal haul to 299 to emerge overall winners of the 17th NSF.

Engr Ikuru who was also the chairman of the Local Organising Committee (LOC) for the Garden City Games said the theme of Team Rivers in the 18th edition is “Participation To Win” saying that they would increase the number of medals won last year in Lagos.

“Our theme at the sports festival is “Participating to Win”, we are prepared.

The Minister of Sports, Mallam Bolaji Abdullahi who was represented by Olusegun Abiodun appealed to Rivers State Government to support and partner with the National Sports Commission at the zonal level.

According to him, the 17th edition of the Games hosted by the state is an event to be beaten in the history of NSF.

“Rivers State not only hosted the 17th NSF but added colour to it,” he said.