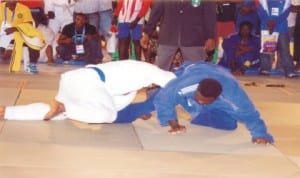 Amateur Judokas battling for glory in a recent national competition

The facilitator of the First South South Open Volleyball Championships, Hon Dakuku Peterside, has said that the tournament, which is billed to serve off today in Port Harcourt will help change attitude and create opportunities in the region.

Speaking with newsmen yesterday in Port Harcourt the member of the Federal House of Representatives representing Andoni, Opobo/Nkoro Federal Constituency in Rivers State explained that the tournament came about after stakeholders in the game decided on the need for a champion of that nature in the region.

According to him, championship will help create awareness and deepen the love for volleyball while creating an opportunity for the youth of the region to develop their potentials and channel their energy positively by taking to the game.

Also, the competition will help translate the abundant sports potentials to economic potentials which will serve to empower the people and change their lives.

The volleyball championship, Hon Peterside who was a former chairman of the Rivers State Volleyball Association, noted, will also promote unity among South South states and ensure that they have a common agenda.

He believes that the sport has high potentials in the state and should be given adequate opportunity to thrive.

The maiden championship which is open to male and female teams from the six states of the zone and some clubs would promote the participation of youth and enhance talent discovery and help teams in the region prepare for the forthcoming National Sports Festival, NSF, Eko 2012 in Lagos.

“Nigeria has the potential to be the greatest nation in volleyball in Africa, because we have the talents across the country. We believe the championship will help us to discover more talents which we know are there to be unearthed,” Hon Peterside stated.