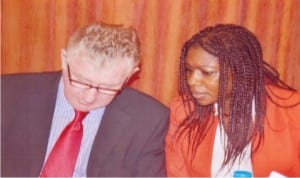 Our correspondent reports that Onyema made the appeal in Lagos during the presentation of “Facts behind the Figures” by Presco Plc at the Exchange.

He said that the Nigerian agricultural sector could only experience meaningful growth by accessing long-term development funds from the NSE.

According to him, the Federal Government transformation agenda in the agricultural sector will be achieved through proper use of opportunities offered by the capital market.

Onyema said contrary to the current focus on oil and gas, that the agricultural sector harboured the key that would drive sustainable economic development and creation of employment in the country.

The NSE Chief Executive Officer said that in spite of government commitment in leveraging the agricultural sector, it contributed only two per cent to total export figures in 2012 against the previous 70 per cent.

Mr Uday Pilani, the Managing Director of Presco, reiterated the company’s commitment to improve returns to stakeholders in future.

Pilani said their commitment was based on the company’s plan to acquire a new jetty that would accommodate 10, 000 metric tonnes of vessels by 2020.

He said that Presco would continue with its on-going expansion programme for sustainable value creation and effective service delivery.

“The company will commence exportation of processed facilities for fertilisers and palm kernel oil by 2020,” Pilani said.

He said that the company was the first fully integrated oil palm with plantations, oil palm mill, refinery and fractionation plants in West Africa.

The company, in the third quarter ended Sept.30, 2012, recorded a profit after tax of N2.19 billion against the N1.52 billion achieved in the corresponding period in 2011.

The turnover in the period under review stood at N6.88 billion compared with the N5.73 billion recorded in the preceding period of 2011.