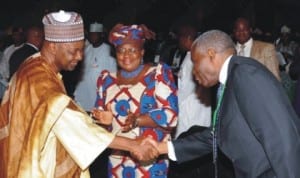 Vice President Namadi Sambo (l) in a handshake with the chairman, Subsidy Reinvestment and Empowerment Programme, Dr Christopher Kolade, at the inauguration of the states Implementation Committee of the Community Services, Women and Youth Employment Project of Sure-P by the Vice President in Abuja on Tuesday(30-/10/12). With them is the Co-Ordinating Minister for the Economy and Minister of Finance, Dr Ngozi Okonjo Iweala

The Federal Government and the EU Monday in Abuja signed an agreement for 260 million euros to finance projects aimed at improving governance and service delivery in 13 states.

Head of EU Delegation in Nigeria, David Macrae, signed for the EU, while the Minister of National Planning Commission, Dr Shamsuddeen Usman, signed on behalf of the Federal Government.

He said that the money would be used in enhancing skills and opportunities for youth employment and to provide access to socio-economic services such as adequate and sustainable water and sanitation.

He said that the remaining 60 million euros would focus on Support to State and Local Government Reform Programme in Anambra, Osun, Yobe, Jigawa, Cross River and Kano to build capacities and processes of the states in public finance programming and management.

The ambassador said the project would run for five years between 2013 and 2017, adding that the grant was in line with the Nigeria-EU Country Strategy Paper and National Indicative Programme 2008 to 2013.

“The two projects will be implemented with the support of several development partners, including the World Bank and UNICEF in collaboration with the benefiting state governments.’’

Earlier, the minister said that the signing of the agreement signified the readiness of the two organisations for the implementation of the projects to impact on the lives of the people.

“Some necessary conditions have to be met by all stakeholders involved in the projects, including the FGN and the states before the World Bank’s effectiveness requirements are attained.

“While the FGN, the National Assembly and the focal state governments are working assiduously to meet those conditions, we have to be ready for the projects implementation take-off at the EU end by signing these agreements.”

The minister said that the EU had set up a team that would go round to identify the flood affected states to know the areas where it would intervene in terms of assistance to Nigeria.