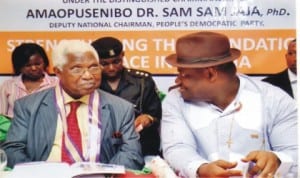 No fewer than 40,000 applicants have finally been confirmed to have failed the aptitude test held to screen candidates seeking recruitment as teachers into the Rivers State public schools.

The 40,000 candidates were among about 60,000 indigenes from across the 23 local government areas of the state and others who had participated in the written recruitment examinations in centres located within Port Harcourt and its environs on 15 August, 2012.

Consequently, about 20,000 candidates have finally been shortlisted for oral interview, commencing next Monday at three designated centres in Port Harcourt.

The Tide gathered that the 20,000 applicants made the Ministry of Education’s next phase of the interview after scaling through the tough examination questions, and making not less than the 160 cut off point set by the ministry.

The names of the 20,000 successful candidates have already been displayed at various locations in the state capital, including the Rivers State Secretariat Complex, premises of the Post Primary Schools Board, Rivers State Universal Basic Education Board and secretariats of the 23 local government areas.

In addition, the 20,000 candidates have also been notified vide their emails and the internet portal through which they completed the registration process for the initial examinations on 15 August.

The Tide learnt that after the written and oral interview, the final list of 13,000 teachers recruited for the state public schools would be published.

A statement signed by the Permanent Secretary, Ministry of Education, Mr Richard Ofuru, advised candidates to check their names, interview dates and centres at the designated locations in the state, and avail themselves of the opportunity to participate in the oral interview.

The permanent secretary implored successful candidates to bring along with them two copies of their completed curriculum vitae, containing their names, dates of birth, gender, state of origin and local government area.

The interview, according to the statement, would be conducted in both oral and written format, beginning next Monday at the Civic Centre Complex, Moscow Road, Ministry of Justice Auditorium, State Secretariat Complex, and the state College of Arts and Science in Port Harcourt.

Noting that each candidate has been notified of the specific date, place and time of his or her interview, the permanent secretary stated that each set of candidates has been grouped into batches, and would be accredited to start the exams at exactly 8am and 1pm for the first and second batch, respectively.

It would be recalled that the Permanent Secretary, Ministry of Education, Richard Ofuru had earlier said that only those who score 160 points and above would be shortlisted and subjected to another round of written and oral interviews as part of the selection process.

However, it was discovered that some persons who scored 160 points and above, could not find their names on the list displayed at the three centres.

Consequently, Ofuru has directed those whose names are missing from the list to write down their names at the Office of the Permanent Secretary, Ministry of Education, and report back to the ministry at 7.30am on Monday for further directives.

Meanwhile, the display centres have been inundated with a sea of heads as hundreds of thousands of applicants for the 13,000 teachers’ jobs scrambled for hours in the last couple of days to spot their names on the list.

Most of the candidates, who spoke with The Tide at the State Secretariat Complex, complained that the names were so tiny that it was very difficult for them to easily identify their names, dates of the interviews and centres.

They also complained that the list was so disjointed that it was to know how many candidates were shortlisted in the first place.

In another development, the Rivers State Ministry of Education has postponed the Common Entrance Examinations into the Nne Kurubo Model Secondary School, Ebubu, Eleme initially slated for tomorrow.

According to a statement dated October 31, and signed by the Permanent Secretary of the ministry, Richard Ofuru, the exams would now hold on November 10, 2012.

He explained that the change in date was necessitated by the need to allow Rivers people observe the monthly sanitation exercise, which comes up tomorrow.

While insisting that the venue and time for the exams remain the same, Ofuru advised those affected to take note of the new date, and ensure that they made themselves available for the exams, expressing regrets at the inconveniences the postponement may cause parents, guardians, and those expected to participate in the exams.