Business mogul and Chairman of Globacom, Dr Mike Adenuga has led the list of 149 Nigerians in the 2012 National Honours Awards.

In the list announced yesterday by Dr. Henry Akpan, Permanent Secretary, (Special Duties Office) Office of the Secretary to the Government of the Federation, Adenuga is to be honoured with the Grand Commander of the Order of Niger (GCON), the only one in the category.

Wife of former Rivers StateGovernor, Hon Justice Mary Odili led  10 others in the Commander of the Order of the Federal Republic (CFR) category, which also include the Inspector General of Police, Mohammad Abubakar, Chief Gabriel Igbenedion.

Governor Gabriel Suswam also led other three governors in the Commander of the Niger (CON) category, which also include senators, ministers and businessmen. There are 26 people in the category.

House of Representatives leader, Mulikat Akande leads 24 other on the list of the Officer of the Order of the Federal Republic (OFR) which also include immediate past Deputy Governor of Lagos, Sarah Sosan.

According to a statement signed by Akpan, the event had been slated for Monday 17th, September, 2012 at the International Conference Centre, Abuja.

President Goodluck Jonathan would conduct the 2012 National Honours Award Investiture on the imminent Nigerians and friends of Nigeria. 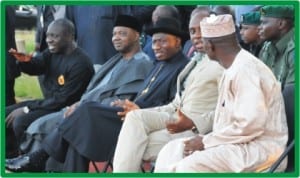 Rivers Hosts Schools Sports …Gets Thumbs Up On Facilities