The National Association of Nigerian Student (NANS) says it is impressed by the performance of Prof Barineme Fakae, the acting Vice Chancellor of the Rivers State University of Science and Technology, Port Harcourt, aligning itself with the decision of Governor Chibuike Amaechi to reappoint him.

President of the association, Comrade Dauda Mohammed made the declaration yesterday while speaking to newsmen shortly after the  national officers were conducted round the university to see for themselves the achievements recorded by the Barimene Fakae-led administration within the past four years.

Comrade Mohammed, a student of the University of Jos, said if the students of RSUST were not joining issues or having any problem with the university authority in terms of welfare or performance of which he said there was none, then the association is satisfied to say Fakae should continue as the vice chancellor of the institution.

Said he: “I had the privilege of moving within the campuses around this country, what I have seen here today is exceptional. We have interacted with the students and they gave us their minds and they were even clamouring for the VC to continue. So, I am in their own web, I am joining their mandate of course”.

Calling on the Academic Staff Union of Universities (ASUU) to have a rethink and go back to class, the NANS president said they should look into the plight of the students, especially as it concerns the fixture for their current semester examinations to enable them cope.

“So, what we want to tell the management of RSUST is to look at the plight of the students as our parents and guardians and have a rethink on  the exams date to enable student cope’, he  said, pointing out that the governor as  visitor to the university has the right to re-appoint the VC based on performance, if the entire university community does not go against it.

“I see no reason why he should not be reappointed if he has performed to the expectation of the Nigerian students”.

Speaking, a student leader, Amadi Godswill appealed to the university authorities, government and ASUU to ensure that the students do not suffer the brunt of the impasse.

He, however, advised students to go about their normal duties and prepare for the examinations as scheduled by the university senate, adding that some lecturers have been teaching.

The Tide recalls that the senate of the RSUST has earlier resolved at its 189th regular meting held last Thursday that there will be no amendment in the calendar of academic activities for the 2011/2012 academic session.

A statement signed by the RSUST registrar, Mrs D.C.Odimabo advised students  to go about their normal academic studies as the second semester examination shall commence on Monday, September 17th  as scheduled.

According to the statement, all students are advised to avail themselves of this opportunity or have themselves to blame. 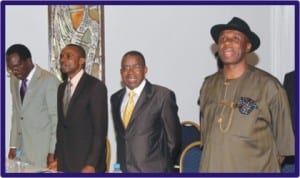 ‘Why Bodo-Bonny Road Is Uncompleted’